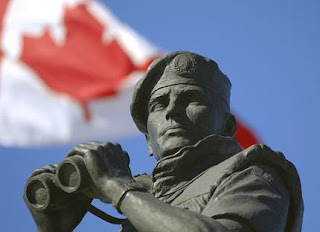 Canada has been known for it's peacekeeping efforts. Roméo Dallaire was an example of a great peacekeeper and a great human being. So was Bill Turner. I recently saw a video on YouTube that mocked Jack Layton's position on the military implying his idea of peacekeeping was to send in folk singers to distract and entertain two opposing forces at war. I found it to be kind of a dumb video and accusation.

Lester B. Pearson won the Nobel Peace Prize in 1957 for organizing the United Nations Emergency Force to resolve the Suez Canal Crisis. During Pearson's time as Prime Minister, his minority government introduced universal health care, student loans, the Canada Pension Plan, the Order of Canada, and the current Canadian flag. During his tenure, Prime Minister Pearson also convened the Royal Commission on Bilingualism and Biculturalism. With these accomplishments, together with his groundbreaking work at the United Nations and in international diplomacy, Pearson is generally considered among the most influential Canadians of the 20th century.

Stephen Harper is no Lester Pearson. When Jack Layton says he's concerned about military pensions, I believe him because he's concerned about everyone's pension. Something that the neocons have no regard for. If we want to talk about supporting the military, let's talk about exposing our own soldiers to chemical and biological weapons then robing them of medical coverage. Let's talk about the ethics of using depleted uranium as a weapon in war. Actually, let's not.

Let's talk about the religious right and Christ's promise "Blessed are the Peacemakers for they shall be called the children of God." When I see all the intolerance in modern Christianity I wonder if Christ came today and taught the same things he taught when he was on earth, it would likely be the Christian church that would crucify him all over again.

Gandhi was a peacemaker. Although he was not a Christian, he was clearly a better Christian than most. Dare we discuss Christ's commission to visit the sick, clothe the naked, house the homeless and even visit those in prison?