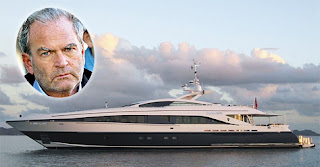 Speaking of corporate fraud and white collar crime, let's take a look at Marc Dreier. The TV series American Greed ran a segment about him the other night.

Crack dealers are irritating because the resulting property crime addicts commit to pay for the drug is bothersome. Yet that is nothing compared to the large scale fraud of white collar crime which not only affects millions of dollars, it also can destroy entire pensions in the process. That is why it's so serious.

Marc Dreier was a fraudster who made a fake bond for $20 million and sold it to a hedge fund. In fact he did it several times totalling $700 million in fraud. On one occasion the hedge fund was getting suspicious and wanted to meet with the CEO of the real company one of his fake bonds were made for. So he gets a friend to pretend to be the CEO and hold a meeting with the hedge fund in a board room in the company's New York office.

He tried the same thing himself in Ontario with the Ontario Teachers Pension fund. That time he impersonated the CEO himself. The buyer got suspicious and asked the receptionist if the person he was just with was really who he claimed to be. When the receptionist said no the police and the Feds were called in to investigate.

Like I said, this kind of large scale corporate fraud not only rips off millions it also destroys pensions which is very serious indeed. That drives us to examine some of the other ongoing corporate fraud out there.