Another body found in Surrey 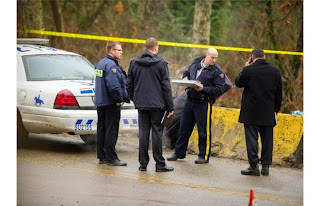 The Vancouver Province is reporting that IHIT is investigating a body found this morning near 102nd Ave and 124 Street in Surrey. Residents reported hearing a gunshot around 11 p.m. Monday. This would be 24 homicides for Surrey this year. Tragic indeed. BC Local news has a complete list.

Not to minimize the situation but after the 23rd murder in Surrey my daughter was surprised. She said I realize that's a lot but it's not nearly as much as I thought it was. I thought it was like 5 a night here in Surrey. She said knowing it was only 23 murders in one year made her feel a lot safer. I'm not sure if that's good or bad but I did find it amusing.

News 1130 is reporting that the name of the victim is Philip Oun who was known to the police.