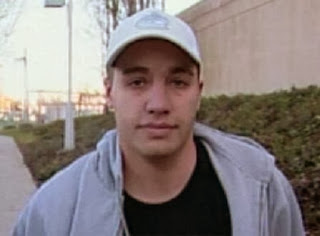 Cody Haevischer’s former girlfriend stated under cross examination that after Cody was arrested in 2009 Jonathon Bacon told her by writing on a whiteboard, details of what happened at the time of the October 2007 Surrey Six murders. "He wanted to make it seem like his brother (Jamie) had nothing to do with it," she told B.C. Supreme Court Justice Catherine Wedge. "It was all about (Surrey six coaccused) Mike Le and money."

So right away Jonathon himself was trying to implicate a co accused and get his POS brother off even though Jamie Pig sh*t was seen fleeing the scene. Jamie certainly was not the brains of the operation. He was shall we say mentally diminished. He was an Orc as they say in the Lord of the Rings. If Jamie Bacon was involved in the conspiracy to commit murder then so was Jarrod and Jonathan. If Jonathon was involved, so was Larry Amero and the Haney Hells Angels I.E. Spike and his dirty misfits. Jonathon Pig sh*t was right about one thing. It was all about money.

Tragically the girlfriend was told they heard a kid in the hall referring to Chris Mohan so Matthew Johnston grabbed him and threw him in the room. Chris told him “I’m not part of this. I don’t know these guys. I’m not their friends,” Yet they still shot him in the back of the head along with Ed Schellenberg. Another innocent victim who was repairing the gas fireplace.

That deranged act is what outraged Surrey and is why everyone here despises the Bacon brothers. There was no need or reason to execute innocent bystanders. That deranged act did not help them rise to the top of the drug trade. It saw Jonathon Bacon shot dead and it saw everyone testify against them in court. That is a natural consequence of such a deranged act.

Yet there is one other bizarre twist that was revealed under cross examination in court. Cody’s girlfriend admitted that the police told her that LeClair was killed by Jamie Bacon or someone working for Bacon and that she was next. She said she didn't entirely believe the police and became angry when she believed police had lied to her.

Lied to her? If the police made that up and lied to her then that would have totally crossed the line. Kim Bolan picked up on that. Kim said Cody’s former girlfriend stated the police came to her on April 1, 2009 and warned her that Jamie Bacon would try to kill her. OK now I’ve heard of police warning a gang member that a rival had put a hit on them but lying and making something like that up totally crosses the line. It puts any future warnings in question. When do we know they’re telling the truth and when they are lying? Lying like that to trick a witness into cooperating with the police is POS scumbag. That’s lowering yourself to the gang members level.

However, Kim Bolan is also reporting that the court heard that Kevin LeClair did give police information about the Surrey Six which means it’s quite possible his murder was indeed an inside job. That’s pretty messed up. It’s hard to know who to believe at this point.