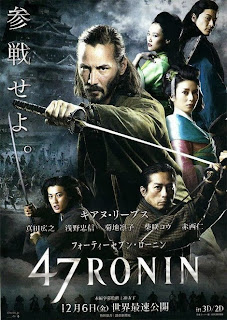 47 Ronin is the best movie ever. We’re talking Shogun, Samurai, Bushido, On (pronounced hone without the H meaning honour). Now that’s what I’m talking about. It’s an epic struggle between good versus evil and exemplifies honour, integrity and loyalty.

If you’ve never studied Bushido or learned about the Japanese culture in that time period then some of it might not make sense but for anyone who understands that culture or has studied Bushido it is amazing.

When my kids were young they were into Harry Potter and the Lord of the Rings. I was impressed they were doing so much reading but I just couldn’t get into fiction so I picked up Shogun. Now that was epic. The ritual suicide thing was a bit hard to understand. No doubt they took it to the extreme. In one case a guy jumps off a cliff to commit ritual suicide just to get someone else’s attention to save his life. The English traveler just shook his head. You’d think he could have thrown a rock to get the guys attention instead.

My two best friends growing up were Japanese. As adults I joked with the one who was the best man at my wedding and said the Japanese sure didn’t have a deep understanding of repentance at the time. You know, if at first you don’t succeed try try again. He laughed and agreed. It is an incredibly noble heritage but I really think you need to put the ritual suicide thing in perspective and focus more on redemption.

The main character in this movie is Keanu Reeves. I asked a friend what else he played in because he looked very familiar but I just couldn’t put a finger on it. They responded with the Matrix. Right. That’s where I saw him before. He was the one in the Matrix. No wonder. This roll was just as epic.

At the time period Japan had an entrenched caste system just like England did. You had to be a certain class to become a Samurai just like you had to be of noble birth to become a Knight in England. A Knight’s Tale is a fun and inspiring movie about someone who seized the opportunity and lied about his heritage to compete in jousting. After he was discovered and imprisoned Robert the Bruce knighted him for his courage which allowed him to finish the competition. Very inspiring.