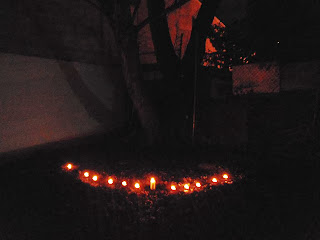 Today is the one year anniversary of the brutal assault that put Janice Shore into a coma from which she never recovered. She died two months later in the hospital. Yesterday I picked up the garbage around the tree she was found beside and made a small memorial. Today someone had already tore it down. It’s sad but it goes far beyond that. That assault and the attempt to censor the memory of it represents a great evil. As does our criminal negligence in allowing the unbridled drug related violence to continue outside the Front Room in Surrey.

Recently after Surrey broke the record for the most number of murders in one year, Dianne Watts used the opportunity for another publicity stunt and promised the world she was going to create a new task force to get to the bottom of it. As if we didn’t already know the cause. One blog reader was somewhat skeptical of her latest promise and referred to her new task force as a talk force. Indeed that is all it is. Just more smoke and mirrors hiding the obvious.

Let’s take the most recent homicide in Surrey for example. Forming a new talk force to find out what caused that murder is rather pointless since we know it happened at an illegal after hours booze can the neighbors have been complaining about and trying to get rid of for seven years. Ignoring those complaints for seven years is criminal negligence. Creating a new task force to investigate the problem now is simply fraud.

The Janice Shore murder is no different. Hiding the brutality of that assault and failing to address the cause of it is another criminal act. Janice Shore was beaten into a coma from which she never recovered. On one side of her head her temple was caved in. On the other side of her head her jaw was caved it. Those injuries had to have been inflicted with blunt force trauma. It looked like a hammer was used on her head. In addition to that one witness claims her eyes were poked out. That level of brutality is disturbing. Hiding the brutal nature of that assault is wrong. Hiding that isn’t to protect the integrity of the investigation. It’s to protect the appearance of a politician’s career.

If Janice Shore was murdered for a drug debt then every drug dealer that sells crack outside the Front Room is a suspect in her murder. Giving the homeless free crack then beating the life out of them for payment is predatory. When we let that happen knowingly we are criminally negligent for the violence that exploitation creates.

Tonight I lit a candle in memory of Janice Shore the patrol saint of Whalley. The memorial may well have been ripped down and her life cut short like a candle in the wind yet her memory lives on. Life does not end at death. Justice will not sleep forever. Truth crushed to the earth will rise again.