Hockey mom asaulted in Surrey has died of injuries 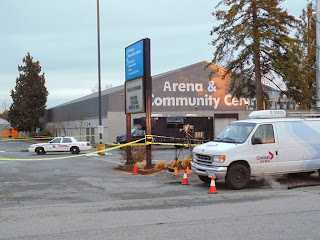 Well our blog reader was right about the police scene in Newton right behind the Newton Wave pool on 137th Street off 72nd Avenue. Lots of media on site. It looks like Global and CTV are on scene ready to broadcast live. I checked the perimeter and didn't see any evidence markers. I was told that it is an expected fatality and that a woman was hit over the head with a rock. That's so Surrey and so tragic. The Surrey Leader was also on scene and will likely have a good insight of what went down them being local and all.

The Surrey Leader is reporting that: "A 53-year-old hockey mom is not expected to survive after being viciously beaten for her purse. On Sunday, just after 9:30 p.m., the woman was picking up her 14-year-old son after a hockey game at the ice rink at Newton Arena, located at 7120 136B St. In the parking lot, the woman was confronted by someone who demanded her purse. The attacker then proceeded to viciously beat the woman. She is in hospital, and isn't expected to survive."

Barbaric. Evidently it's not gang related but what are the odds drugs are involved? Someone getting robbed and viciously assaulted for five bucks to buy more crack. We've seen that before. That pushes the years record homicides to 25 not 24. The violence needs to be addressed as does the causes of it. Letting crack dealers sell crack in public creates a profound amount of public violence. The Front Room is a huge concern but Newton is another. 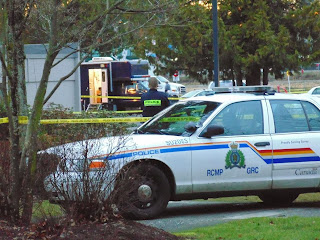 The Surrey Now is reporting that a Newton advocate says she's warned council about the area's crime. Big surprise. Just like they were warned for years about that illegal booze can that someone was finally murdered at. Jude Hannah, founder of ReNewton said: "We have been calling on the city to take action and this is absolutely the worst nightmare. And I feel so upset, I feel so angry, I’m so disappointed... This was what we feared would happen, and we warned them,” she said. “I hate to say blood on their hands… (again) but that’s what people have said. This is just shameful.”

“First of all, we need the mayor to address the situation and to get the focus off the city centre and trips to Israel and all of that…. Her legacy wont be that gleaming city centre, but that she’s just pushed Whalley down five miles into Newton. And that will be her legacy. And nobody wants to see that,”

Dianne Watts and Bill Fordy have stopped the crack dealers outside their new ivory tower but as this advocate said, they pushed them over to Newton and the Front Room. We need to follow up and arrest the crack dealers there too. That is the New York model. Building a wall around her new Ivory tower and letting the rest of the city go to pot is somewhat hypocritical. Oh right, the Newton Seniors got the casino that Whiterock didn't want. Thanks for nothing.

Update: The Vancouver Province and the Vancouver Sun is reporting that the mother has indeed died of her injuries incurred during the Newton assault. The Vancovuer Sun is also reporting that Diane MacDermott, one of the owners of the Beach Basket, located across the street from the Newton bus loop, recently said she may close her doors as a result of the area’s crime. She said where once they used to have baby strollers lined up outside, now they have people waiting to buy drugs. MacDermott said the area is plagued by drug dealing, homelessness and prostitution.

The Surrey Now is reporting that Surrey residents call for immediate action to make Newton safe. The flaming concern is public sale of crack and drug addicted prostitution. When you let drug dealers sell crack in public, you create a huge amount of drug related violence from addicts stealing to pay for the destructively addictive poisons. Cutting down the old growth trees will do nothing as long as they continue letting drug dealers sell crack there. The problem is the crack dealers not the trees. 25 murders. A very sad end to the year.

This is the second attack in that area in the past two weeks. On Dec. 16, a Surrey woman in her 20s had just got off the bus at the Newton exchange, about 200 metres from the arena parking lot, when she was assaulted. She was injured in the attack, taken to hospital, then released. This second attack has resulted in the police issuing a public warning in a frail attempt to absolve them of legal liability for more assaults.

Here's the problem. Warning the public isn't good enough. You have to do your job and stop promoting lawlessness. Selling crack in public is illegal. Letting them sell crack there as long as they don't sell it outside the mayor's new ivory tower is not equal protection of the law. Letting the crack dealers sell crack in Newton and outside the Front Room is criminal negligence. The police and the mayor can get sued for that as well. Criminal negligence for refusing to enforce the law and refusing to respond to citizen complaints. That goes for this homicide as well as the one at the illegal booze can they refused to do anything about. It's time to name Diane Watts and Bill Fordy in a class action law suit for refusing to enforce the law. That is the only way they will start enforcing the law. If they are sued in court for not doing so. Just like the Ontario police were sued for not issuing that public warning about the balcony rapist.