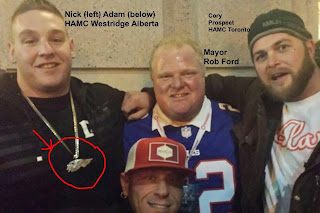 Rob Ford’s daily drama continues. After stealing Matt Mays’ seat at a Buffalo Bills game in Toronto he poses for a picture with some Hells Angles. Rob Ford sluffed it off by claiming he gets his picture taken with lots of people and had no idea they were Hells Angels. He must not of noticed the giant deadhead bling around the guy’s neck because he was in another drunken stupor.

Rob Ford getting arrested for beating his wife, admitting to smoking crack and new allegations of using heroin all paint a picture of an abusive lying drunk. It’s pretty obvious that he was reelected by people who knew he was an abusive drunk but didn’t realize he smoked crack. It’s highly likely that he won’t get reelected.

Yet the fact that he was reelected as an abusive drunk and the fact that he still is Mayor given his daily insanity is a stain on all of us. After all, who’s the bigger fool? The fool or the fool that votes for the fool? It is crystal clear that Ford Nation / Sanitation is evil. They are on the wrong side of the struggle between good versus evil.

That doesn’t mean we have to believe what they say. Doing so makes us look like idiots. I’m going to have to agree with Al Yankovic on this one. I don’t support Rob Ford or his abusive and criminal activity. I don’t want to be a Canadian idiot like the rest of them.

Nevertheless, guys like Rob Ford are flaming idiots that everyone can clearly see. In Surrey we have a much deeper and more sinister problem and because it is disguised so well it is much more serious. Just as bad as the Montreal corruption inquiry. The only difference is that we have no inquiry in Surrey. Just bullying and censorship.

BTW the two Hells Angels in the picture with Rob Ford are from Westridge in Edmonton. The prospect was from Toronto. Westridge are the ones that support the Whiteboy posse, neo Nazis that have been charged with cocaine trafficking and murder including the decapitation of Bob Roth for a drug debt. Westridge also sponsors the Dirty Few who also support the Whiteboy posse and have been accused of a recent drive by shooting in Drayton Valley. Nice guys indeed. Rob Ford sure is a people’s mayor. He just supporting the wrong people.

Posted by Dennis Watson at 2:42 AM