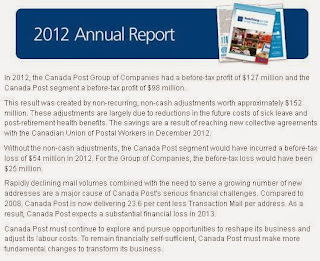 Canada Post has come up with some very dramatic lies that need to be addressed because it effects our civil liberty. When a corporation that big is allowed to tell that many lies and get away with it, we all suffer and the press is no longer free. Canada Post has just made three outrageous statements. The first of which is the announcement that they are going to do away with door to door delivery of mail. That's like a restaurant saying they are going to no longer serve food but they still want your money. It's bad business. It reduces business revenue.

The second is the absolutely absurd claim that their "think tank" claims they are going to start losing money at such an unprecedented rate that they forecast $1 billion in annual losses by 2020 unless changes are made. That is an insane lie and any media outlet that reports that false claim as true should have their press credentials revoked. If nothing else the public should stop buying their newspapers period.

The third outrageous scare tactic is to raise the price of stamps to a dollar right before Christmas. That is an act of business terrorism. It's as though they want to kill mail volumes completely. Which I submit is exactly part of their political agenda. Back in the day Canada Post used to offer a reduced rate for Christmas cards knowing that people send many out at a time. If it was a card only they got a reduced rate. That's like a black Friday sale. It generates more business volume. Something Canada post doesn't want to do because of their extreme political agenda which has nothing to do with public accountability.

I have a lot to say on this matter and will say much more. However, at this time I will simply address the most obvious and most pressing lie that is fueling this fraud. That is the ridiculous claim that they will in the future anticipate that their 16 year trend of record profits will somehow magically be reversed into a billion dollar a year deficit. That is a bold faced lie.

For 16 years Canada post made a consistent profit. 2011 was the first year that changed because of a labour disruption. Why was there a labour disruption? Because Canada Post wanted to do away with sick leave and destroy the employee's pensions. That was the issue on the table. It had absolutely nothing to do with wages. It was about route measurement and pensions. As a result, Canada post locked out it's employees knowing full well Stephen Harper would legislate them back to work with an imposed settlement which is exactly what they did again. The right to strike is part of the free collective bargaining process in a free and democratic society. That does not exist at Canada Post. Corporate monopolies need government intervention to keep them honest.

They keep arbitrarily coming up with these insane ideas to destroy pensions and benefits then consistently lie to the media about the numbers. Canada Post's MO has not changed one bit. Yes I used to work for Canada Post. That was a long time ago. I took one for the team back when Moya Greene was sent in to privatize Canada Post. She tried to sue me for slander when I posted a screen clip of the Bombarier stock crash when she was involved with it after she helped derail CN. That was over ten years ago. She took my job but I kept the web site. Her first lawyer, Michael Manson from Smart and Biggar did kinda look like Charles Manson in the eyes. I said to him then, Alright Chuckie, you might be a devil and it might be a sin, but I'll take your bet so I will because a public post office is the best there's ever been.

Indeed it is. These consistent record profits are paying dividends to the government. It's a cash cow. Getting rid if that is getting rid of a huge amount of tax revenue. Something they are dying to do because their political agenda is not to create tax revenue, it's to privatize everything so their friends can gouge consumers and contribute to their political campaigns in return while consumers are left paying more and more taxes. It is a criminal fraud that needs to be investigated fully.

First is the billion dollar deficit lie. The Union posted an accurate list of the profit Canada Post has been making up till 2006. By their own figures they admit they continued to make record profits until the labour disruption which they caused by trying to take away pensions in 2011.

Denis Lemelin pointed out that the corporation lied about the decrease in mail volume and he pointed out that despite the nominal decrease in mail volumes the amount of profit the corporation has made has continued to increase. There's a reason for that. The letter carrier routes are based on volumes. If the mail volume decreases the route gets loner which in turn cuts jobs. That is already built into the equation. So when they keep crying about decreased volumes they fail to mention that automatically means a decrease in jobs. The bottom line is that this billion dollar annual loss is fraudulent. Parcel delivery is increasing because people buy things online.

Cutting door to door deliver and raising the price of stamps to a dollar is not necessary. That is an absolute lie. I have much more to say but that will suffice for now. The billion dollar lie is exactly that. A lie. It is false. Stopping door to door delivery is something the public should be consulted on without the false numbers and the false jump in price of stamps. This fraud needs to be addressed because it all boils down to public accountability just like the BC Hydro fraud.