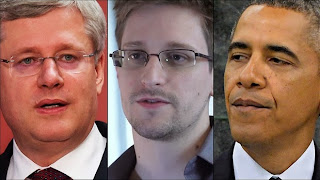 CBC is reporting that a top secret document retrieved by American whistleblower Edward Snowden reveals Canada has set up covert spying posts around the world and conducted espionage against trading partners at the request of the U.S. National Security Agency.

The briefing paper describes a "close co-operative relationship" between the NSA and its Canadian counterpart, the Communications Security Establishment Canada, or CSEC — a relationship "both sides would like to see expanded and strengthened. "The intelligence exchange with CSEC covers worldwide national and transnational targets." PRISM is just another name for PROMIS.

CSEC is a criminal organization. Stephen Harper should be in jail. Harper is violating the constitution by letting Americans spy on Canadians then letting them share that information with CSES and visa versa. The CSEC watchdog claims the leak is misinformation which is false. Kinda like how the last chair for the CSIS watchdog was arrested for fraud tied to Iran contra.