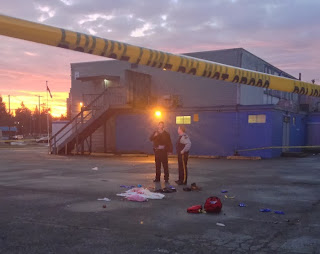 The Surrey Leader is reporting that a man is in hospital after being stabbed several times in Whalley. The stabbing occurred Monday afternoon at about 3:30 PM near the corner of 106 Avenue and 135 A Street in the parking lot of the Whalley Legion which is right beside the Front Room. The exact spot we are highlighting this winter for the drug related violence there. It is where Janice Shore was last seen before she was brutally beaten to death over what some sources claim was a nominal drug debt.

Although this stabbing doesn't appear to be drug related, it shows what kind of violence goes on in that area all the time. The Surrey Leader referred to it as the dead zone. A place when locals say the police tolerate violent crime. We know for a surety they tolerate aggressive crack dealers selling crack in public there. they refuse to stop them. Which makes ya kinda wonder what the new talk force is talking about while they let that go on in broad daylight. I guess the mayor doesn't care about that as long as it's not outside her new ivory tower in Surrey Central.

Michael Booth seems to think a group of grandstanding politicians is a waste of time and money.

I think they need to arrest the aggressive crack dealers outside the Front Room.

On the bright side, this suspect won't be loose for long. The Surrey Leader also reported that at about 10:30 p.m. Wednesday, a man and woman with what is described as a small machete approached a man in a blue 2003 Dodge Caravan at an Esso Station near 104 Avenue and King George Boulevard. They told him to get out, and hand over the keys.

As the couple got into the vehicle, they were approached by two other men in their mid-20s who then stole the van from the car jacker and took off. About 10 minutes later, and a few blocks away, the Surrey Fire Department was called to the Front Room Drop-In Centre at 10667 135A St. on a medical call. On arrival, they found a man who had been stabbed in the upper left chest. He was taken to hospital by ambulance with non-life threatening injuries.

So the Surrey Jack got Jacked. Now that's the Surrey we know and grew up in. Just like in that dirty Surrey remix, I pulled out my shank and the Surrey Jack ran away. After they get jacked they go and stab someone outside the Front Room. Surrey criminals aren't known for being very bright. The car jackers that got jacked had their faces recorded on surveillance video at the gas station. So the police know exactly what the suspect looks like. I'm not sure why they haven't handed out a picture of the suspect to the media. I sure hope Bill Fordy is trying to solve crime not just suppress crime statistics for his political aspirations.

Posted by Dennis Watson at 9:20 PM