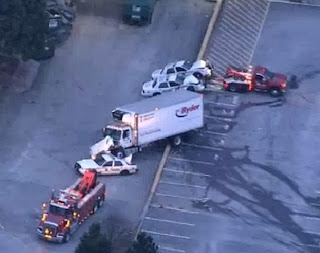 The Vancouver Sun is reporting that a Surrey man allegedly stole a large rental truck and, just after 1 a.m., drove it into six unoccupied cruisers parked outside a community policing station near Burnaby's Lougheed Mall. Surrey what?!

Police arrested the man after he got out of the truck and took him to Burnaby Hospital at 3 a.m. where he ripped out a sprinkler from the ceiling, causing a flood in the emergency room. Some patients being treated had to be relocated to a different section of the hospital. [Global video]