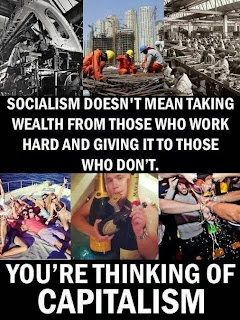 I saw this interesting picture and caption on a friend's facebook and I had to comment. I will first clarify that I am not a fan of Socialism or Communism. I think most will agree what Stalin, Lenin and Chairman Mao did was wrong. They set up dictatorships that we should vigilantly oppose. The point I want to make is that we need to be mindful as we oppose that evil, we don't in reality embrace it.

I have always said, draw a line in the sand and call it democracy. The further you go away from that line to the left or the right, the further away from democracy you get and the closer you get to dictatorship. A right wing dictator is no better than a left wing dictator. In fact when push comes to shove they are in reality quite similar.

I have frequently used the term Corporate Communism and have pointed out that is was the banks and the oil companies that actually funded the Communist Devolution in Russia. When I first found that out I was shocked and found it incredibly ironic. After all the big banks and oil companies represent the greed of Capitalism which is what we are told is the direct opposite of Communism. Yet when we realize it's really about exploitation and greed, then we can clearly see how similar those two extremes really are.

When discussing politics I do not agree it's a debate between socialism or capitalism. I do not define capitalism as democracy. Don't get me wrong, I am very much half capitalist. I have no problem with someone making a buck off of a good idea. I just think we have to be mindful that as we oppose the extremism manifested in Communism that we support democracy not corporate greed. We need to support a free market in a Democratic system. Corporate monopolies destroy the free market because they crush small business. Large corporations don't promote a thriving economy where everyone who works hard prospers. The industrial revolution is the prime example of that fallacy. Large Corporations exploit workers and taxpayers just like Communism does.

This brings us back to Occupy Wall Street. Sure there are a few wing nuts that show up waving a Communist flag. Those clowns show up at every demonstration. Yet the corruption on Wall Street is a huge concern for everyone especially when their fraud gets bailed out with tax dollars. That scam rips off tax payers. You don't have to be a left wing extremist to get angry about paying too much tax and having tax dollars spent on investment fraud like the Greek financial crisis.

I keep emphasizing it's about establishing a Free Republic based on a Constitution which protects human rights. There is nothing wrong with the Canadian Charter of Rights. The problem is when the courts become a law unto themselves instead of enforcing the law which is what they are supposed to do. This new insane decision from the supreme court about prostitution is a huge threat to our sovereignty. Yet this other decision of the courts to protect the constitution is important. Here we see two examples of what is right and what is wrong with the courts.

The right to belong to a criminal organization is not a charter right. Living off the avails of prostitution is not a charter right. Yet the freedom of speech and the freedom from unnecessary searches and seizures is. I find it astounding that Stephen Harper can actually go on the record as opposing the Charter of Rights. That makes him more of a Communist then Pierre Elliot Trudeau ever was. I also find it astounding the Justin Trudeau has the audacity to pretend he supports the Charter of Rights when he just supported one of Harper's bills to do away with it.

The stereotypes are being shattered and it behooves us to use our brain and do what Preston Manning originally challenged us to do. That is look beyond the left and right and look at issues. Sadly, his quest fell when they acted on a typo and changed the motto from unite the bright to unite the right. As soon as they did that, they merged back with Mulroneyism and became the exact entity they originally set out to oppose. Right now the free republic hangs by a thread.