Homicide in Richmond linked to burnt out car in Surrey 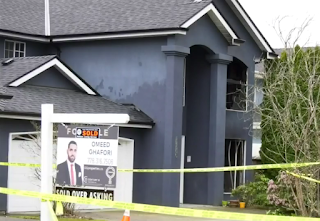 This morning the news said the police found a burned-out car on 194th Street and 16th Avenue. As soon as they reported that we said who'd they shoot? Now the Vancovuer Sun is reporting that "On Thursday around 4 a.m., firefighters were called to the 22000-block of Rathburn Drive in Richmond to deal with a house fire. Once the fire was extinguished, investigators combed the charred site and found two people dead inside the home. Few details were released but investigators said circumstances led police to classify the deaths as homicides."

"At this time the two victims have not yet been identified, said Det. Lara Jansen of IHIT. Jansen also said that a burned black BMW SUV was found a short time later, abandoned near 16th Avenue and 194th Street in Surrey, and is believed to be linked to the double homicide and fire in Richmond." Yeah, that's what we thought. CTV posted a news video.

Update: CTV is reporitng that IHIT announced the victims were brothers Chaten Dhindsa, 25 and Joban Dhindsa, 23. Both were known to police. Sounds like they were low level drug dealers that set up shop in Surrey and were capped by the red and white with the assistance of the CFSEU.