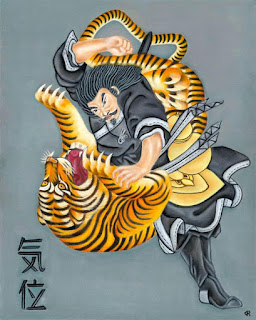 I have a copy of Clay Roueche's print of a Samurai locked in combat with a tiger on my wall. I look at it when I'm lying upside down in my inversion table. I was always intrigued by that painting. The artwork is flawless but the message is profound.

At first I thought it was a bit wishful thinking like some of the more unrealistic martial arts movies of people flying through the air running on leaves and branches. Yet I saw a guy at the gym yesterday who was practicing his jumping skills and it sure looked like he was flying. However, if we step back and pull out a .44 or a .308, that invincible enemy is soundly defeated.

For me it symbolizes being locked in combat with an impossible foe. We all have our own demons to face. It fittingly illustrated Clay's struggle with the legal system in prison. He faced two years in solitary and wrote an inspiring book of empowerment. He gets out of solitary and he paints amazing prints of dragons and phoenixes. He befriended and interviewed martial arts legend Dennis Alexio while in prison. He hired people to set up a website for him and sell his artwork online. Basically, he was thrown in a pit, struck a match and lit a candle. The light from that candle illuminates far beyond his prison cell for the world to see.

Yet this samurai locked in combat with a tiger is inescapable. He calls it Kigurai which is the Japanese word for pride but in Kendo it has a deeper meaning. Kigurai is not arrogant, it is confident. Like in the song New York which says "I'm not cocky I'm confident, so when you say I'm the best that's a compliment." Sadly, Bill DeBlasio has flushed New York down the toilet.

Clay states that "Kigurai essentially means an aura of strength that commands respect. A person that radiates kigurai has an air of nobility and grace, the type of person whose very presence sends shockwaves through the room. The man that possesses true kigurai lets his actions do the talking for him, like this Japanese art print of a samurai fighting a tiger."

As I said in my previous post, arrogance and confidence is different. Confidence is faith derived from self-respect. Arrogance is fake and is derived from a poor self-image. Somone who is arrogant surrounds himself with material possessions and needs those to tell him he has worth. He needs to have more than his neighbour because he is insecure. Kigurai is not boastful.

So when I look at the Samurai locked in combat with a tiger, I think of the All Blacks haka. One of the original translations refers to an ancient time when a group of Maori warriors were greatly outnumbered. One of them yells out we're gonna die. The teams responds we're gonna live. This is repeated then the conclusion is, live or die were gonna fight. To me that is what this painting represents. For we have a labor to perform whilst in this tabernacle of clay, that we may conquer the enemy of all righteousness, and rest our souls in the kingdom of God.

I'm not interested in resting my soul in the kingdom of God but I am interested in conquering the enemy of all righteousness. So like the New Zealand All Blacks, live or die I will fight because as long as we fight, as long as we resist evil, we win. We die free.