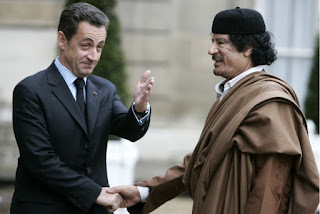 CTV is rpeorting that "A Paris court on Monday found French former President Nicolas Sarkozy guilty of corruption and influence peddling and sentenced him to one year in prison and a two-year suspended sentence. The 66-year-old politician, who was president from 2007 to 2012, was convicted for having tried to illegally obtain information from a senior magistrate in 2014 about a legal action in which he was involved. The court said Sarkozy is entitled to request to be detained at home with an electronic bracelet." OK that's pretty lame. He was involved with far worse. Take the Karachi affair and the desecration of Moammar Gadhafi.

The Karachi affair involved kickbacks in the sale of submarines to Pakistan. It also involved a false flag terrorist attack in the 2002 killing of 14 people - including 11 French engineers - in the Pakistani city of Karachi when that kickback contract was cancelled.

The Desecration of Moammar Gadhafi earned Sarkozy the title le chien sal for setting up and betraying Gadhafi after accepting millions of dollars in campaign contributions from him. Sarkozy was trying to convince the world we could trust Gadhafi with nuclear weapons as long as Gadhafi was going to buy a French nuclear reactor. Then as soon as Gadhafi decides to buy a reactor from Argentina instead of France, Sarkozy convinced the world Gadhafi was a dictator they needed to invade and execute. That was shameful.