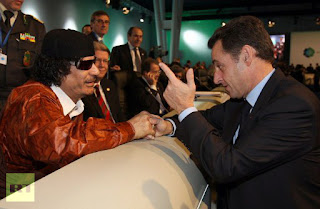 The Vancouver Province is reporting that French President Nicolas Sarkozy is denying multiple allegations that he accepted millions from Gadaffi for his 2007 election campaign before leading an assault against him.

This not a new allegation. Gadaffi's son said the same thing. Sarkozy had a long term relationship with Gadaffi and Libya. They sold him arms for years. In fact the new allegations exposing the money trail between the donations turned up in court investigating a French Arms dealer named Ziad Takieddine.

The president's fury comes after investigative website Mediapart released a report by French terrorism expert Jean-Charles Brissard. Its claims that Sarkozy secretly received Gaddafi's millions for his previous election campaign are based on court testimony to an arms trafficking probe.

The report alleges that French arms dealer Ziad Takieddine arranged the Gaddafi donation channeled via Panama and a Swiss bank account in the name of a sister of one of Sarkozy’s key political allies, the head of his UMP party. The deal was said to be reached during one of Sarkozy’s frequent trips to Libya as French interior minister, where he met Gaddafi in person.

Sarkozy and Takieddine both deny it but let's look at what we do know. We do know that France sold Libya arms for years. We now that Takieddine was a French arms dealer in Libya and that Sarkozy made multiple trips to Libya. In fact the year in question, 2007, saw Sarkozy make one of his frequent trips to Libya where he told the world that we should trust Gadaffi with nuclear power because he wanted to sell him a French nuclear reactor. What's the matter? Did Gadaffi decide to buy one from someone else? Is that what this is all about ? In 1976, Iraq purchased an "Osiris"-class nuclear reactor from France.

"If he had financed it, I wasn't very grateful," Sarkozy said sarcastically, in an apparent reference to the active role that France played in the NATO campaign that led to the strongman's ouster. No kidding. Like I said before, Sarkozy screwed Gaddafi royally.

What's even more disturbing is the claims that a complicated plot involving the 2002 killing of 14 people — including 11 French engineers — in the Pakistani city of Karachi, which involves defence sales, kickback allegations and intermediaries reportedly channelling millions of dollars worth of cash, Karachigate has been making headlines in France over the past few years and has long threatened to implicate Sarkozy.

French media reports as well as some of the families of the Karachi attack victims have suggested that the suicide bombing was in retaliation for scrapped defence commissions. 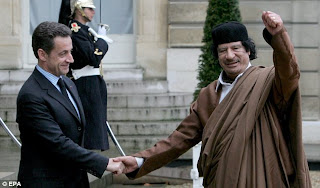