Judicial Arrogance not up for Review 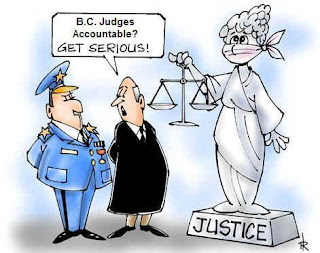 The Vancouver Province is reporting that the judges don’t want their independence to be under review and claim that they need to educate the stupid public about what it means to be learned in law. No big surprise there. No doubt the police didn't want a civilian body to deal with police complaints either.

Before a judge becomes a judge they have to be a lawyer first. At one public demonstration about judicial unaccountability, one man comes up to me and says, all judges at one time were lawyers. At what point does a crooked lawyer become an honest judge? Is there some kind of epiphany that’s supposed to take place because I’m not seeing it.

Judicial arrogance is nothing new. Lawyers and judges think they are better than everyone else because they are learned in the law and the public isn’t. That makes them better in their eyes. That’s why they refer to each other as their learned friend in court. I remember getting in a fight with one lawyer once as we were arguing in front of the trial coordinator about what direction the judge gave us for our next court date. I referred to him as my friend then proceeded to state my objections.

The other lawyer snapped. He went on this tirade about this and that then insisted I wasn’t a lawyer, I was unrepresented. The trial coordinator was surprised as she thought I was a lawyer and told me I’m not allowed to refer to him as my friend which obviously gave the implication that I was a lawyer. I said I am the other party and I am representing myself. I have the same rights as any other lawyer. I can’t call him my friend? He’s not my friend? How about buddy? Can I refer to him as my buddy? You could see the steam spewing out of the other lawyer’s eyeballs. He was furious.

Right before that he tried to get me to withdraw my application. We had made cross applications in court. He saw I was winning so he withdrew his application. I said to the judge that I had also made an application and have already served the other party with it. If they want to withdraw their application, I want to proceed with mine. He freaked. He asked me to withdraw and I just said I’m sorry but I believe proceeding with my application is the right thing to do. He came unglued and started yelling and freaking out right outside the courtroom.

Aside from being arrogant, judges don’t want to be accountable because they don’t see interpretation of the law as a survey of public opinion. On the surface that argument has merit. Interpretation of the law isn’t a matter for Pontius Pilate to survey the mob. However, we do have a problem and their arrogant denial of that fact isn’t going to help solve the problem.

Right now we have no real mechanism to get rid of a bad judge. We need one. Peter Leask is a prime example. It doesn’t take a brain surgeon to understand what justice is and isn’t. Giving someone house arrest for trafficking cocaine is not right. I don’t care how much watered down jurisprudence you’ve memorized. The law answers to natural justice. Most lawyers and many judges have no concept of natural justice whatsoever.

I remember back when we started this blog and website there were several demonstrations calling for more judicial accountability. One group kept showing up with signs that boldly declared : “Judges are the Problem.” They printed up T-shirts that said “Revolving Door makes Judges Accomplices” and “100% Contempt for BC Judges.” Their beef was property theft.

They had a guy named Jamie Pool in their neighborhood who kept ripping them off. The police knew who he was. Every time he was arrested he was given less time served not more. This infuriated the residents, understandably so.

In the United States they have a policy called three strikes you’re out. After making the same mistake three times, you get the book thrown at you. In contrast the VPD launched a proposal called 30 strikes and you’re out. As ludicrous as that sounds, they weren’t kidding. Our current system has a huge problem with chronic offenders. That still needs to be addressed.

Some people, mostly judges, claim you’re not allowed to criticize a Judge. Retired Judge Wallace Craig disagrees. He has seen the judicial pendulum of justice swing in the wrong direction and he claims that criticizing judges who make bad decisions is a moral duty. I agree. If our arrogant court judges aren't publicly accountable, then we don't have a democratic system. In the United States court judges are elected and can be impeached. Here they are untouchable. 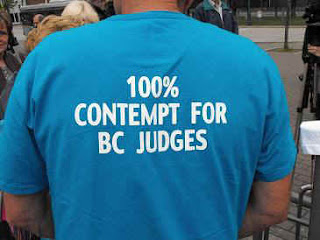