Phasing out of Oxycontin 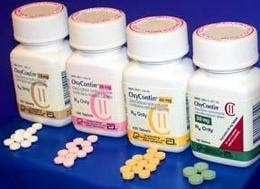 OxyContin - the popular painkiller known as hillybilly heroine on the streets - is no longer available in Canada, but health-care workers say doctors, manufacturers and government officials need to team up to tackle pill addictions. Starting Thursday, Canadian manufacturer Purdue Pharma will roll out another painkiller called OxyNEO instead of OxyContin.

The new type of oxycodone is supposed to be harder to abuse and can be swallowed as a whole pill but not crushed or injected to get high.

The medication, which is produced by drug company Purdue Pharma, is also no longer on the list of drugs doctors can prescribe. Oxycontin has also been removed from the Health Canada program that pays for prescription drugs for First Nations members.

For someone who needs Oxycontin as a painkiller, a prescription for Oxycontin can still be filled during March, which is being called a transition period. But doctors are now asked to prescribe OxyNeo, instead.