The Hells Angels vs The Million Dollar Rat 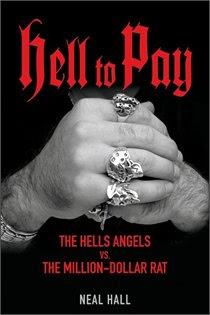 We’ve talked a bit about Neal Hall’s book Hell to Pay when it first came out. It came out around the same time that documentary about the East Vancouver Hells Angels was on TV. Well, I’m at Chapters the other night having a peek through the True Crime section. I was looking for the book by Julian Sher, The Road to Hell.

They had the Sixth Family there. I picked up a copy of Neil Halls book and I say to myself ya know I really oughta fork out the money and pick one of these up because it obviously has a lot of pertinent information about the Hells Angels connection to the drug trade here. I start flipping through the pages and take a look at the photos in the middle section. They have pictures of Glen Hehn, David Giles, Ron Lising, Kerry Ryan, all the familiar faces.

Then on the last page of the photo section the top picture jumps out at me. Hey, I recognize that picture. I made it. It’s a photoshopped picture of Peter Leask with bugs bunny rabbit ears on a Looney Tunes background. It explains that the picture was from the Gangstersout blog under the heading Peter Leask should be hanged for treason after Peter Leask came out with yet another watered down decision involving the Hells Angels. My eyes just about popped out of my head as I was somewhat shocked. That was a pretty bold photo credit.

So once again I will site the book, The Hells Angels vs the Million dollar rat, and say it is worth a read. People laugh and say Michael Plante screwed up his life for nothing as there were no real convictions out of that whole effort but I beg to differ. It did clearly show how very involved the Hells Angels are with the local drug trade. That adds to the case law establishing them as a criminal organization.

As for Michael Plante, I didn’t realize he worked the door at the Newton Inn in Surrey before he went to the Orange Number 5 in East Van. I hear he was a bit of a hot head. I don’t know where he is now but we do need more people in Surrey coming forward with things they know about the dark side of the drug and prostitution trade. People are already starting to spill the beans about the Surrey House of Horrors.