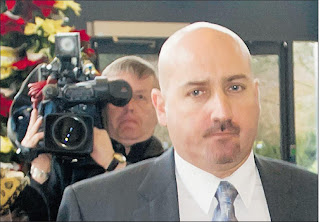 The Office of the Police Com-plaint Commissioner has ruled Vancouver police Const. Lee Chipperfield didn't use excessive force in killing Paul Boyd during a 911 call on Aug. 13, 2007. Only I disagree.

Resisting arrest is a serious offence. Yet the law and more importantly the moral obligation governing the use of force addresses the concept of reasonable force. If someone pushes someone, pulling out a gun and shooting them in the head would not be an example of reasonable force. That would clearly be excessive.

In this case the police respond to a 9/11 call. Thanks for doing that by the way. It can be a thankless job as we all know. When police arrived at the scene after receiving a report of an out of control man on Granville, they came across Boyd.

One officer, while seated in a police cruiser, was approached by Boyd, who appeared to be holding a hammer. The second officer drew his gun, and ordered Boyd to drop the hammer and get on the ground.

Boyd, 39, complied, but when approached by police jumped up and struck the officer several times with a bicycle chain. Attempts were made to stop Boyd, but he ran into the street, swinging the chain. Const. Lee Chipperfield, one of the officers at the scene, fired several shots from his service pistol, with a fatal shot hitting Boyd in the head. Boyd was suffering from bipolar disorder and hadn't taken his medication that night.

OK bipolar not taking his meds. The police had no way of knowing that nor does it excuse his conduct. It just puts it into the perspective of mental health. He put what the police thought was a hammer down. Then he ran into the street swinging a chain. Shooting him in the head is excessive. In that case the officer should have pulled out his truncheon, trapped the chain and broken disabled the suspects knee.

If he had a knife and was making stabbing motions at the public that would have been more serious but what ever happened to putting one in his leg? Why do we always have to go for the kill shot and put one in his head or chest. Guy with mental health issues swings a chain and gets shot in the head. Then someone tells us it OK because the officer didn't do anything wrong. It's not OK.