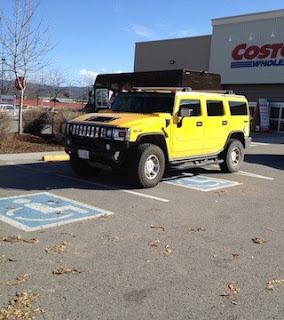 This is the epitome of greed. Hummers and SUVs have become popular choices among drug dealers because they are so expensive not many people can afford them. I have no idea why because SUVs are butt ugly. They aren’t sporty at all. They look like a soccer mom’s mini van. Hummers are so outrageously expensive they just aren’t worth it.

This photo of a hummer parked outside Costco in Kelowna is creating quite the stir on Castanet. A lot of people are understandably upset about it. People hate it when a disrespectful kid or young man parks in a handicapped stall just because they think they are better than everyone else. It is a prime example of greed. It’s disrespectful.

Some people tried to appease the anger by claiming the store wasn’t open but that wouldn’t make sense. If the store wasn’t open there would be many empty parking spots they could have parked in. The concern is a lack of respect for others. Like a young prick blasting his music with no regard for anyone else on the planet.

Or like an old prick who has loud pipes and intentionally guns it in a quiet neighborhood to piss off everyone else just because he has no regard and no respect for others. They say pride cometh before the fall. We can only hope. Time will tell. It always does.