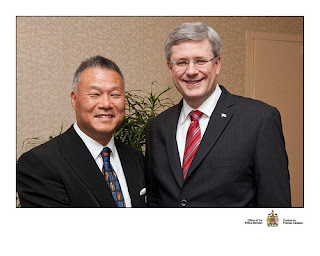 Tuesday, the Vancouver Province reported that the Ministry of Advanced Education is investigating how a senior member of the Eminata Group, a Vancouver-based education conglomerate, came to be in possession of private correspondence between The Province and ministry staff.

Advanced Education Minister Naomi Yamamoto claimed she did not share the e-mail but said her office would look into it. Today, the paper reports that MLA Harry Bloy apologizes for leaking information related to Province investigation and as of 2:00 PM had resigned from his position on Cabinet.

Bloy was minister of state for multiculturalism when he came into possession of an email The Province had sent to the ministry of advanced education seeking comment on Eminata Group founder Peter Chung. Bloy forwarded that email to Eminata, a provider of post-secondary education at six for-profit schools in B.C. that was being investigated by The Province.

Peter Chung is the guy under investigation in his for profit schools and has claimed he never admitted to wrong doing. When the province wrote an article about complaints his school is receiving. So the Liberal minister decided to give the guy a heads up that the Vancouver Province is asking about him. Why would he do that? If a for profit school is scamming the system, wouldn't everyone want that scam cleared up not swept under the carpet?

Global is reporting he is a frequent donor to the Liberal party. Another for profit enterprise bribing another dirty politician to make himself rich. Sad.