The Pickton Inquiry continues to Crumble 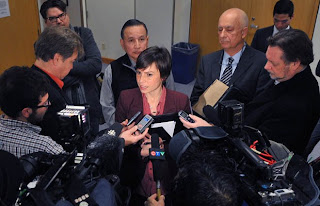 The Missing Women Commission of Inquiry was dealt another blow to its credibility Monday with the withdrawal of the last lawyer who speaks for First Nations.

Virtually all key women’s and community groups had already pulled out of the inquiry after they were denied legal funding to analyze 100,000 pages of documents. Robyn Gervais, appointed last Aug. 12 as “independent counsel for aboriginal interests,” left the inquiry after commissioner Wally Oppal refused to hear her statement.

The Missing Women Commission of Inquiry has lost any remaining credibility with the aboriginal community after the withdrawal of a lawyer representing aboriginal interests, the leader of B.C.'s chiefs said Tuesday. "It has no credibility," Grand Chief Stewart Phillip, president of Union of B.C. Indian Chiefs, told reporters.

"Given that these hearings are largely about missing and murdered aboriginal women, I feel I shouldn't have to fight to have the voices of the aboriginal heard," said Gervais, who is Metis.

"The delay in calling aboriginal witnesses, the failure to provide adequate hearing time, the ongoing lack of support from the aboriginal community and the disproportionate focus on police evidence have led me to conclude that aboriginal interests have not and will not be adequately represented in these proceedings," Gervais told Oppal.

"While I recognize that it is necessary to hear from police, I became increasingly concerned that you would not hear from aboriginal witnesses," Gervais told Oppal. She said the inquiry has sat for 53 days, has heard 39 days of police evidence and minimal evidence from the aboriginal community.

Oppal pointed out that there has been much criticism of police and the commission wants to correct the mistakes made in the past. He also agreed with Gervais, who complained that of 24 lawyers at the inquiry, most were representing police at taxpayers expense.

Sad but it is clear that Wally Oppal is just in it to scam a pay cheque without allowing the real issues to be discussed. Like the underlining cause of the murder of Ashley Machiskinic.