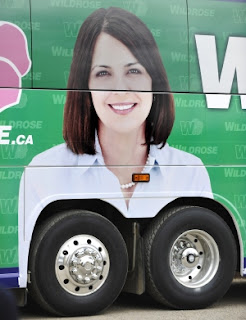 We've all heard of the term my wild Irish Rose. Well yesterday the wild rose party of Alberta made the news. Everyone was making fun of them for their silly bus(t). They said it was a mistake and everyone was saying if they can't get a bus right, how on earth are they going to get the government right should they get the job.

I have two points on the matter. First, I don't think it was a mistake. I think some male capitalist in the party thought it was a good eye idea. They thought it was an eye catcher. Kinda like writing the word sex discreetly in an ice cube advertising some form of alcohol.

Second, I think the Wild rose party is worth looking at. They are supposed to be VERY conservative. More Conservative and separate from the "Progressive Conservative" party. Progressive, regressive. Tomato tomato.

They even appear to be concerned about changing the drunk driving laws from .08 to .05 which I agree is stupid. We want to stop drunk driving. The people who are obviously driving impaired. Yes some alcohol can impair your driving but seizing your car after two drinks is insane.

Alberta’s Wildrose Party has come up with a unique way of fermenting populist anger against the ruling Progressive Conservative party. Wildrose members have recently been spotted giving away drink coasters outside of local watering holes, to protest the province’s new drinking and driving law. One side of the coaster features a slash through the number “.05” with the text, “drink responsibly,” while the other side has a red line through the letters “PC” and reads, “vote responsibly.” A novel campaign tactic, to be sure.

The coasters refer to a recently passed law, which will penalize drivers who have a blood-alcohol content (BAC) of .05, even though the legal limit under the Criminal Code is .08.

“We’ve done polling on this and we know that two to one Albertans don’t want the .05 legislation. They don’t like it,” said Wildrose MLA Rob Anderson. “They think it’s a gross abuse of government power. It infringes on people’s rights and it doesn’t go after the real problem on our streets, which is people who are well over the legal limit.”

Harper's new attack adds against Bob Rae are a prime example. First, it isn't anywhere near and election. Second, Bob Rae's response was right on the money. He said the Harper Government only destroy things. they only tear things down. They are not capable of building anything constructive.

I'm not a fan of Bob Rae. I think the party made the wrong choice at the leadership convention. I think they should have elected Trudeau Jr. Yet I agree with his response to the Harper attack adds. Although I don't agree with the fight fire with fire approach. That is the same message.