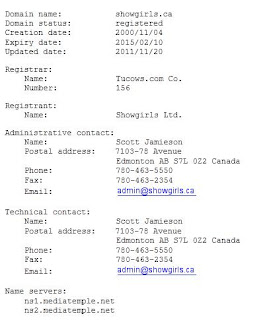 We know that two patrons of Showgirls in Edmonton followed a mentally challenged mark after he left the club then robbed and beat the victim to death. The judge in that case noted the bouncer admitted he initially lied to police about the incident, but accepted that was explained by his fear that his manager could have been involved and the club was owned by the Hells Angels.

We know that Neil Patrick Cantrill, an Alberta Hells Angel was accused of the production and distribution of large amounts of methamphetamine. Court documents allege the Hells Angels are believed to be in control of "meth" sales in Fort McMurray.

We know that Two Hells Angels from the Edmonton chapter allegedly partnered up with a Fort McMurray drug kingpin to ensure his cocaine-trafficking operation ran smoothly. The full-patch Hells Angels were Alan Peter Knapczyk, 35, and John Reginald Alcantara, 37, and the head of the Fort McMurray drug gang was Jeffrey Mark Caines, 36, who plead guilty to trafficking cocaine.

Alcantara - who was handed a 14-year prison sentence after being convicted of conspiring to traffic cocaine - pleaded guilty to an identical charge. He admitted he had entered into an agreement to assist Caines traffic cocaine in Fort McMurray, but denied that Knapczyk was part of it. I.E. he took the fall for him.

The prosecutor alleged Alcantara, who was then a prospect for the Hells Angels and sponsored by Knapczyk, was the front man in the agreement and collected the weekly fee while Knapczyk was the enforcer behind the scenes.

Court heard the agreement involved the removal of any rivals of Caines' drug gang, ensuring other suppliers in the area did not undercut his business and the protection of Caines and his distributors for a weekly fee of $20,000.

"Essentially it gave Caines free rein to supply cocaine in the specified area and protection for those he supplied," said Hrabcak. "In return he paid a fee or tax to the individuals. The reputation of the Hells Angels was used to enforce the agreement." That makes it a criminal organization alright.

The Hells Angels were convicted of doing the same thing in Winnipeg. Not only did they profit from selling the Zig Zag crew cocaine which they in turn sold as crack, but they also collected dues or protection money from them to eliminate rivals in the drug trade. That pattern keeps repeating itself across the country as they branch out and take over the drug trade in smaller towns and communities.

Clearly Scott Jamieson’s Showgirls in Edmonton appears to be the same hub in Edmonton that Tbarz in Surrey is for the Jones brothers drug trafficking operation. Seize the bar. Word is on the street that the Edmonton PD is still struggling with allegations of passing on information to the Hells Angels. Maybe that’s why they were suppressing homicide stats by calling a SUV riddled with bullets as a suspicious death instead of a homicide.

What I really want to know is in one hand we have strippers and blow. In the other hand we have crack and hoes. There was a girl who went missing from Edmonton. Shannon Collins Her sister was told she was working in the sex trade industry for the Hells Angels.

Sadly enough, just like the Surrey house of horrors, Georgina Papin from Edmonton’s remains ended up on the Pickton farm. She frequented Showgirls. Just like Stephanie Lange from the Orange Number Five in East Van did. The Orange Number Five was run by the Hells Angels as well. There also seems to be a few missing women from the Edmonton area. If the Hells Angels control the drug trade and the strippers in Edmonton, do they control the prostitution there as well?