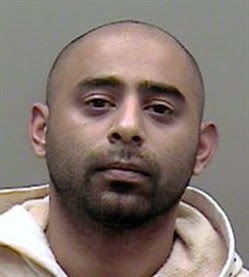 Three men who were associates of slain gangster Sandip (Dip) Duhre were ambushed by several gunmen as they arrived at a Surrey house Tuesday night. One of the three - Harm Gill, 28 - was hit by the gunfire, which began to ring out just after 10 p.m.

Gill remains in a Vancouver hospital with nonlifethreatening injuries. The other two men were not wounded. RCMP Sgt. Peter Thiessen said any one of the three in the Duhre-linked trio might have been the intended target.

Police have warned of escalating gang violence between rival groups - one described as the DuhreDhak group and the other a loose alliance of some Hells Angels, members of the Independent Soldiers and Red Scorpion gangs.

Tariq Mohammed Aslam is awaiting trial in Kelowna with two others after being charged in September 2010 in connection with a 97-kilogram load of cocaine smuggled into Canada in the steel drums of a fruit-grinding machine. Do ya think "they" were worried he was going to cut a deal? Does Clifford Roger Montgomery know Glen Hehn? Please advise.