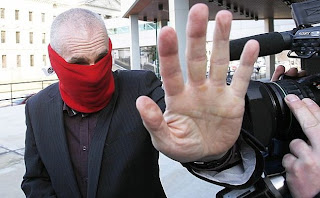 Graham James received a two-year prison sentence for sexually abusing ex-NHL star Theoren Fleury and Todd Holt, Fleury's younger cousin. Fleury and Holt said the decision was a national national travesty. They are absolutely right. This ties in with our earlier concerns about judicial arrogance.

Is the public really that stupid? D owe really need to be educated in the law and brainwashed by watered down jurisprudence until we come to understand that two years for sexually abusing two boys is a fair and equitable sentence? I think not. It's time the judges realize their arrogance and their refusal to be publicly accountable is in fact treason.

Fleury and Holt issued a joint statement about the decision:

"We know that childhood sexual abuse has reached epidemic proportions in our country," Holt said. "Graham James once again . . . spread his sickness right through the courts of Canada.

"He conned the judge with his 'poor me' and 'I regret' statements. His lawyer defended the indefensible, and he's been rewarded for doing so . . . Graham James is laughing all the way back to the life he's always led knowing that justice for him is but a blip on the radar."

I don't know if childhood sexual abuse is more prevalent now as oppose to 30 years ago but I do know it is heinous as is this "judgement."

In another case the Crown's appeal of a conditional sentence for a Surrey woman who exposed her three-year-old niece to scalding bathwater, leaving the little girl with extensive burns, has been dismissed.

The offences began on Oct. 21, 2007, when the accused severely shook the infant and then placed her in an over-hot bath for about 10 minutes. Three days latter the tot was taken to Children's Hospital. The girl had extensive burns and bruises to her body.

Sounds like this is the year of failure to defend the child. Canada has now officially de evolved into a backward nations with this glaring flawed system that mocks justice.