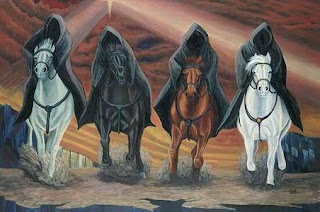 We’ve talked about the extreme nature of the gang related violence in Mexico before and how it appears that their criminals have no respect for the sanctity of life. The violence keeps getting more and more deranged until one is forced to ask oneself who on earth are they trying to impress?

When someone commits a deranged act of criminal violence, that most certainly does not earn them the respect and admiration of the public. Fear yes, but respect and admiration, absolutely not. People don’t admire someone like Robert Pickton or whoever else was involved in the murder and mutilation of sex trade workers from the Downtown East Side. People don’t admire deranged murderers who hack up dead bodies just for kicks. People are repulsed by it. People question the metal stability of those who engage in it.

Ya gotta wonder, don’t these guys fear God? Life most assuredly does not end at death. Do they really think they can scare God? Why on earth would God be scared of these deranged criminals? They can’t even stand in his presence. Do they really think they can fool God? Do they think saying a couple of Hail Mary’s or a couple of Our Fathers will save them when they have committed a brutal murder? Do they think after they rape someone’s daughter and say Abracadabra, I believe in Jesus, that all will be well? Guess again. The devil knows who Jesus is and that knowledge doesn’t save him.

The bottom line is that we are free to make choices and we are accountable for the choices we make. If we have caused pain and suffering we will experience what we have done for ourselves. No one is perfect, everyone makes mistakes and no matter what we have done there is a road back to redemption, but it isn’t as simple as some people think. When we start to glorify deranged acts of brutal violence, then we are asking for eternal justice to stop us from digging ourselves a bottomless pit.

I remember being back in Ireland many years ago. I was in a town called Limerick in a strong IRA area. It was actually a branch of the IRA called the INLA. I was sitting down having a heart to heart with a guy who claimed he was a mercenary and was just back from Lebanon. He talked about the violence and how he witnessed someone take the lord’s name in vain and someone else blew his head off because he thought the guy was religious.

I said to the guy, have you ever thought about a career change? He was a bit surprised by the question and said like what? I said gee I dunno, farming maybe? To my surprise he sighed and got all sincere. He said I thought about farming. My father’s a farmer, my brother’s a farmer. I tried it but it just wasn’t for me. Then I thought to myself I can’t believe I’m having this conversation. This guys two choices for career plans was being a farmer or being a mercenary?! Isn’t there something else in between those two extremes he could try?

Then I think about the brutal violence in Mexico and I say God help them. Not just the good, God fearing people of Mexico but the deranged criminals who are begging to be wiped off the face of the earth by committing those deranged acts. God help them because their time is short. They don’t have to wait for some far off judgment. Some other gang will give them a taste of their own medicine long before that. Sometimes justice isn’t so slow. Buyer Beware. As ye so, so shall ye reap. Word.

One group appears to be willing to call a ceasefire for the Pope's visit. Nice, but not nice enough.