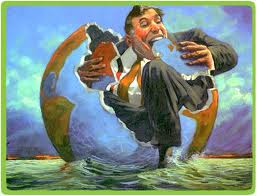 Right now there is a lot of polarization surrounding the teachers strike. The government should pay teachers a fair wage and allot money for education because education is important. No doubt. The government using the kids as political pawns in their campaign to slash budgets so they can keep giving themselves a raise is wrong.

Yet, in the real world, how much taxes we spend on education counter balances with how much money we spend on heath care and other government programs like police, fire as well as road and bridge construction. The money has to come from somewhere.

Likewise the union using the kids as pawns to get a bigger raise for their members is wrong too. Is your dispute really about class size or is it really about wages? Why did you choose to become a teacher in the first place? You’re only in grade 12 once. Cutting out extra circular activities in that crucial year will never be replaced. What if that extra curricular program is the only thing keeping a kid in school? Dropping the program and having that kid drop out of school would be a tragedy.

They say the company gets the union it deserves. If a company is ruthless in exploiting it’s employees, they usually get or create a militant union to counter balance that drive. Some of the most productive and profitable companies are ones that actually consider customer service and genuinely care about how they treat their employees.