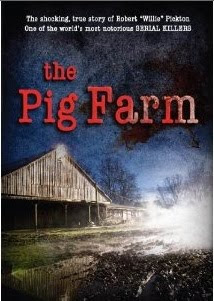 CTV put out an interesting documentary about Robert Pickton called The Pig Farm. It’s available on DVD and came out in 2010. It was well done in the sense that they tracked down and interviewed people who actually lived on the farm and it really showed how problematic the police investigation was.

There are a lot of wackos out there with criminal records of violence. The police had 40 to 100 suspects. A daunting task at the time with all the budget cuts. The problem was getting a search warrant. Police received a tip that one person who lived on the farm saw Willy in the barn with a dead woman hanging by a rope. When the police called her in to question her she adimatedly denied it so they couldn’t get a warrant.

They finally got a warrant when a former resident of the farm said there was an illegal weapon on the farm. That gave the police the right to enter the farm. That wasn’t until Feb 5 2002. They found women’s’ clothing, ID and an inhaler belonging to one of the missing women. That finally gave the police enough information to get a warrant to search the farm for bodies.

One resident of the farm claimed Willy asked him one night if he wanted to get a hooker. He claimed Willy said do you know what I do with hookers. He then pulled out handcuffs and a belt and told him he handcuffs them and strangles them. Two days later a couple of Willies friends came up to him and asked to speak with him in the trailer. There they confronting him claiming he stole from Willy and beat him up. He took that as a warning not to say anything about what Willy told him to the police. So he didn’t. He left and kept his mouth shut. Other people beating him up would also imply other people were involved in the murders.

Although it was informative, there were a few very crucial points completely left out. The documentary barely said a word about Willy’s brother Dave who also lived on the farm. It didn’t mention a word about the fact that Dave had been convicted of sexual assault on that same farm himself. They didn’t say a word about another accusation of sexual assault involving Dave when the woman claimed Dave tied her to the bed with bungee cords and tried to shove pills down her mouth. The police acknowledged on the stand that when they searched Dave’s room they did find bungee cords and pills just like the woman described but said just because someone is accused of a serious sexual assault doesn’t make them a murder. Rather bizarre not a word about that was mentioned in the documentary.

However, there were a series of very relevant statements made by friends and associates of Willy. “Every human is capable of killing. I just really don’t think that Willy could do it all on his own. To this day I’m still not sure what happened on that farm.”

Perhaps that is the most relevant observation. The instructions the judge gave to the jury was that Robert Pickton could be convicted even if there were other people involved. Even if he wasn’t the main person involved. He could be convicted if he was simply an active participant. So what if other people were involved with murdering women on the farm and Willy helped dispose of the bodies? That needs to be addressed. We still haven’t heard which off duty police officers attended parties at Piggy’s Palace and why. Wally Oppals refusal to let anything about the Hells Angels involvement be discussed at the inquiry mocks the families and makes the inquiry meaningless.