Woman killed at the Cobalt Hotel 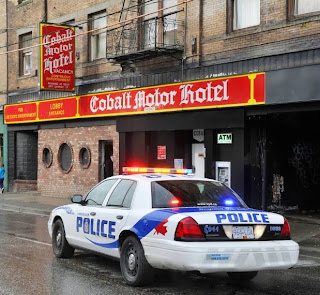 Vancouver’s latest homicide at a rundown Downtown Eastside hotel has renewed calls for the city to clean the building up. A woman in her 30s was killed in the Cobalt Hotel in the 900-block of Main street early Monday. The woman reportedly was stabbed.

The victim was among three stabbed in a violent spree in the upper floor of the hotel at around 6 a.m. Police say the woman was found in critical condition inside the Cobalt, but are not releasing any further details. The Cobalt is known for its hard-to-house tenants, many of whom have serious drug and alcohol problems.

The Cobalt is owned by slum lords Pal and Gurdyal Sahota. Gurdyal Sahota was recently fined $115,000 under the Residential Tenancy Act for repeatedly allowing a Surrey property to fall into disrepair and dodging his responsibility to make the property livable. It was the first time an administrative penalty had been imposed under the act.

Tony Terezakis was a Hells Angels associate in East Vancouver who video taped himself beating drug addicts who owed money as he shouted Praise the Lord and spit in their face at the Cobalt and the American Hotel in East Vancouver. Gee, I wonder what organization is running the drug scene there now?