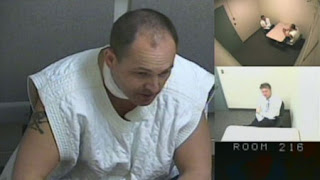 Another former RCMP officer on trial and in the news. This time for the murder of an Ottawa police officer. Obviously we can’t blame this one on the entire police force. Surely they don’t train their officers to kill each other. Clearly this was one wacko with problems. Yet there are elements of the case that I find disturbing.

During interrogation he claimed that there was a struggle and his training took over and he instinctively killed the other officer. He made the same claim in court arguing that he should be charged with manslaughter not murder. Rather bizarre.

The officer who was interrogating Gregson asked him what he meant by it was part of his training. He asked what training he was referring to because he wasn’t trained to kill in police training. After all he is not a special forces commando engaging the enemy in hand to hand combat where he would be trained to kill the enemy. The police are trained to use reasonable force in arresting suspects. Not to kill them.

Gregson said it was part of his police training. The officer said no it’s not. I’ve been a police officer longer than you and my training wasn’t to kill people. Gregson said well you’re not RCMP. I see. Another dingledorf playing the superior training of the RCMP card. Which would reinforce the stereotype about the abrasive arrogance associated with the RCMP wherein they think their training is far superior to other police force training making them better. Or at least less accountable.

Somehow we need to get over that glaring false stereotype. That the RCMP is the most respected police force in the world and is so much better than other police forces. All we have seen in the past ten years of disclosure is sexist unprofessionalism, rape, abuse and excessive force. Obviously there are good police officers out there. Yet the unending documented complaints of sexual inappropriateness on the job from top officials has made the force the laughing stock of the world and carries with it the stigma of being unprofessional.

Some hecklers on the blog think I’m a police officer. I have no desire to prove them wrong my trashing the police. Hecklers will be hecklers and criticize everything I say simply because most criminals don’t want the exposure.

I do support law and order. I do have an idealistic and possibly naive image of what the police should be like Paul Gross in the TV series Due South. When I trash talk gangs selling crack, and the hecklers claim I sound like a cop, then it would appear that on some issues, I totally agree with some officers. Frustration with the judges would be another.

Yet I believe in the sanctity of life and the dignity of humanity. I believe the police are civil servants and that their mandate is and always has been to serve and protect. Civil servants means it is their role to serve the public who they protect and who pay their wages. Lawyers think they are better than the public because they are learned in the law. They use the term my learned friend. Likewise some police tend to think they are better than the public because the public don’t understand what the police have to put up with on the street.

Clearly what the Williams Lake police officer did to that young girl was wrong. Clearly. Clearly there is something wrong with a man punching a woman in the face repeatedly. Reasonable force means using a restraining hold not punching them in the face over and over to let you vent your anger issues built up since Depot. Clearly we do need to aspire to something higher.