A Penny for your thoughts 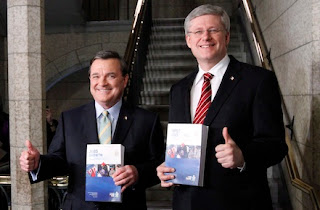 Here we have it. A flaming idiot bragging about the new budget like he’s some kind of a rock star. 1) This is not a good budget. 2) Stephen Harper is not a good person.

The circus side show was launched as a distraction from Elections Canada’s announcement that the Robocall scandal has expanded to 200 ridings not just one making it impossible to be the result of one rouge member.

Getting rid of the penny isn’t really a big deal but it is an a smaller way. What are small businesses going to do to calculate all those ridiculous new taxes on everything we buy? They are either going to round up or round down. If they are supposed to support small business, why are they encouraging consumers to shop across the border in this new budget? These guys are truly insane.

So Stephen Harper has officially killed the penny. As well as the adage a penny for your thoughts because his government clearly does not want to hear our thoughts. A Conservative is supposed to be a conservative not an extremist. A Right wing extremist is no better than a Left wing extremist simply because they are both extremists. A real conservative shuns extremism and appeals for common sense.

Stephen Harper is not a conservative. He is what Ron Paul would describe as a neo con. A new kind of extremist that is really a con man striving to con the public instead of polling the public. In practice a neo con does not support democracy. They resort to dirty tricks and propaganda to railroad their strange agenda as they wave the flag and give vocal lip service to democracy.

The spin doctors were rationalizing the news that the Robocall scandal has expanded to 200 riding instead of just one by claiming there have only been 800 complaints spread across 200 ridings. That would mean the dirty trick voter suppression was not significant enough to change the results in any individual riding. I do not believe that there were only 800 instances spread over 200 ridings. We know there was more than that number in Guelph alone. What’s significant is the proof that more than one riding was involved.

This budget raises the retirement age from 65 to 67 because Harper gave the banks $65 billion when they didn’t need it. That flaming injustice is the heart of this budget and needs to be addressed. That is nothing to brag about.

Clearly the disinformation campaign continues to fan the flames of the original problem. It has become a circus side show of propaganda just like the inherently dishonest HST adds. We don’t want a penny for your thoughts. We want to brain wash you so we can rip you off. Taking our pensions and giving them to the banks.

Excessive privatization for the sole purpose of removing public accountability so they can rip consumers off like in the BC Hydro disaster. It really boils down to greed. Ripping consumers off so their friends can get rich and contribute to their bizarre political campaigns. 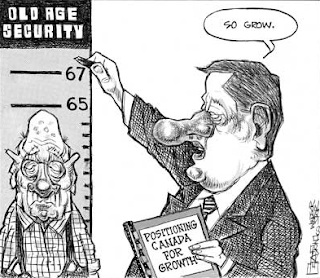