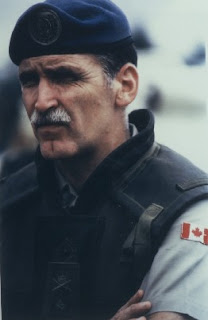 I’m going to make two posts that may seem off topic but do relate to the heart of confronting organized crime before I dive in to the Kelowna summer jam. Since blog posts usually get buried after they’re made, I’ve devoted a web page to keep track of the K Town OC. (Organized Crime in Kelowna)

The term Canadian Values is a term politicians often exploit to promote their own political party while trying to tear their opponent’s political party. Often politics is more about tearing something down then building someone up. The new attack adds against Bob Rae are a prime example.

The liberal party was wiped off the map last election. Yet the Harper government is so paranoid about them that they have issued new attack adds targeting their new leader no where near an election. Bob Rae rightly pointed out that the Harper governed just tears things down. They aren’t capable of building anything up.

Unfortunately, the Liberals have vowed to fight fire with fire and the resulting mess reminds me of that pivotal BC leadership debate between Mike Harcourt, Rita Johnston and Gordon Wilson.

Rita Johnston were fighting back and forth like cats and dogs. Rita Johnston was insulting everything possible about Mike Harcourt including his manhood. Mike Harcourt just stood there and smiled holding a BC Care Card in one hand and an American Express card in the other saying which do you really prefer? As the debate got heatred and Harcourt and Johnston were arguing back and forth, Gordon Wilson said “There you have if British Columbia. This is why nothing gets done in Victoria.” He stole the show.

Gordon Wilson, who’s party was previous nonexistent prior to that debate, stole the show. He was calm, intelligent and constructive. He gave voters a hopeful alternative. Unfortunately, his marriage to one of his MPs was scandalized and Gordon Campbell took over the party and sent it straight down the toilet. Gordon Wilson was hopeful. Gordon Campbell was not. One tried to build something up, the other succeeded in tearing it down.

Which brings us back to the term Canadian Values. Most Canadians have an image of what they feel is important and how they want to be viewed in the world’s eyes. When I think of Canadian Values I think of the Canadian General in Rwanda portrayed in the movie shake Hands with the devil. Canadians have been known for their peacekeeping efforts. Most Canadians want Canada to be peace keepers not war mongers or war profiteers

Unfortunately politicians have tried to tarnish and scandalize the value of compassion. Linear thinking politicians try to related it to a left versus right debate. The right scandalizes compassion while calling it socialist. They claim we shouldn’t have compassion because that takes us down the road that leads to Communism. That is probably the most ironic statement in recorded history.

Hijacked Communism like we saw under Lenin, Stalin and East Berlin was known for it’s lack of compassion and lack of tolerance. It really wasn’t that much different from what hitler gave us in Fascism. Two different roads leading to the same place - dictatorship.

I really liked Carol James. She tried to restore dignity to British Columbia with the motto “Because everyone matters.” She cared about seniors getting exploited and shut out. It was a heart warming campaign that made you feel proud. It restored our dignity in ourselves and in our country. So do Jack Layton.

Jack Layton had been around as a politician for many years. No one really took him seriously because he was labeled as a left wing union loving socialist. They kept saying the NDP would tax and spend us dry when they were the ones that did exactly that with Mulroney style pork barrel politics. Brian Mulroney was not a good man. That is why the Reform party separated themselves from him. Stephen Harpers brought the party full circle into enduring the very insanity they originally sought to correct.

As people because disenfranchised with the corruption within the Liberals and the heartless intolerance and extremism within the Harper Government people started to take Jack Layton seriously and heard him out instead of listening to the silly stereotypes that not longer were believable.

Jack Layton came across as a friendly politician who really cared. Not just someone who kissed a baby on camera while holding a knife in his hand to stab voters in the back. Jack Layton personified his motto of love, compassion, hope and optimism. Those are all good values that most of us cherish.

Another politician who historically inspired us was Lester Pearson. He was a man who built things up. Her accomplished many great things as a result. I have heard it said by a Reformer of old that Old Age Pension was welfare for the aged. In one sense I can understand what he meant. OAP is separate from CPP. CPP is a pension that we all pay into. OAP is not. It’s just a top up that everyone gets when they reach 65.

Should someone who ism independently wealthy get OAP? That is a valid question. The problem is that many companies payed a better wage 20 years ago then they do now. Compare that to the skyrocketing cost of housing in the last 20 years and you see a huge discrepancy. That’s not even including the fact that most large corporations keep many employees as part time to reduce their wage increases and benefits.

Most seniors now are in the poverty range. Most retirement pension plans take the OAP and the CPP into consideration when they calculate their pay outs. Cutting the OAP from most seniors would have tragic results. However, to question whether or not the extreme rich should receive the OAP at all is a valid question.

The problem is that the heartless right gets it’s campaign donations form the extremely rich. If the Harper government was to submit legislation stopping the OAP for people with a certain amount of assets then those campaign contributors would complain.

I’m just trying to say that we should indeed remember the spirit of Jack Layton. Love, compassion, hope and optimism are good things. Rolling up are sleeves and working together to build a better country with a vision of Canadian values is a good thing. Attack adds that tear each other down is not.