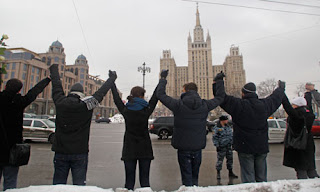 There have been a lot of demonstrations in Russia these days filled with allegations of voter fraud. Vladimir Putin has admitted there were violations of electoral law during his recent presidential-election win but brushed off claims of a 10-per-cent boost to his vote, saying the malpractice was too insignificant to influence the result.

This is rather bizarre. Putin admits rigging but sluffs it off by claiming it is insignificant. Vote rigging is significant. It is illegal and immoral. Back in the day, dictators would rise and oppress the people. Now the snakes in the grass enter from within and steal democracy through fraud. Buyer beware. Our freedom is still at stake.

Police said they arrested 250 people in Moscow and 300 in St. Petersburg after moving in roughly to break up rallies claiming that Sunday's polls were rigged.
Some 20,000 anti-Putin protesters had turned out in Pushkin Square in central Moscow chanting "Russia Yes! Putin No!" Most of the rally dispersed peacefully but police moved in to disperse hundreds of people who refused to leave the square.