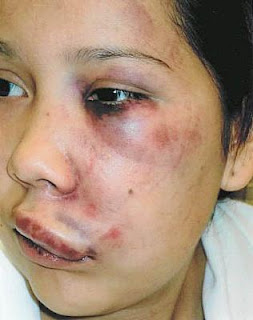 An assault charge has been recommended by police probing a Williams Lake Mountie who allegedly punched a teenage girl repeatedly last year while she was handcuffed in the back of a police cruiser.

Obviously there are several concerns here. The girl was allegedly running away from a street gang and asked a bystander to call 911. Her mother gets a call and rushes to the scene. All of a sudden the girl running from the gang is arrested and thrown into the back of a police cruiser. She starts kicking the window shouting out Mom.

Couple things... if she was the one that asked for the police to be called, why was she arrested? Why was she so afraid of being taken away by them? One would think that if you are innocent of nay crime that you have nothing to fear and will sit calmly waiting for the misunderstanding to be reveled. Perhaps she was afraid she wasn't going to be believed.

There are two questions that arise. First is if a prisoner starts kicking the police car window from inside the vehicle, what is the police officer supposed to do? One could reasonably argue that letting the kid freak out and have a temper tantrum would be fine as she would eventually tire. Just like a kid in time out.

It makes me think of a youtube video I saw of a police officer in the States arguing with a woman on the street. All of a sudden he winds up and punches her in the face. I'm like where on earth did that come from? What part of the police training manuals says when a suspect doesn't obey you command at the snap of your finger, you are justified in punching her in the face?

The first thing I'm forced to ask is does he beat his wife and kids? Evidently Const. Andy Yung has past history. Seemingly this story was first published in The Province Sept. 28, 2011 and it's taken this long to consider doing anything about it. 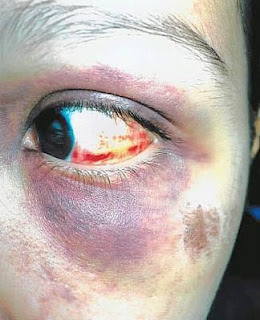 Another thing we need to talk about is racism. This whole issue of violence against Native women needs to be addressed. I do not understand how people can think that using violence against a native woman is ok because it’s not.

Discussing it is timely but also relevant since the last lawyer representing First Nations women has just withdrawn from the Pickton Red Herring Inquiry. Not all the women found on the Pickton farm were native but a large number of them were. There continues to be a large number of Native women missing and mistreated in the DTES.

Yet their mistreatment is by no means limited to east van. There was that horrific case of a court Judge in Prince George who was convicted of violent sexual abuse of under age Native girls. That is somewhat bizarre. Historically we’ve heard about the abuse that Native children suffered in the early school system. Physical abuse as well as sexual abuse. Tragic and bizarre. This still needs to be addressed.

The next thing we need to talk about is discipline. When I first had kids, I wanted to be a good parent. I took a series of courses called discipline without shouting or spanking. There was a lot of talk about how corporal punishment was wrong but not a lot of talk about healthier forms of discipline. You can’t just say to a parent spanking is wrong without giving them tools to replace it with. The last thing we want to do is raise a generation of spoilt brats.

My father was big on fences. He said we all have fences. Even as adults. As a child we are placed in a virtual fenced area. You’re allowed to play in the yard or the street but if you go beyond that you’ll have your freedom restricted. Sure enough I learned that lesson well. My father used to say as a kid demonstrates he can handle the rules within a fenced area, then he is given more freedom and his fences expand. As he shows that he is unable to keep the rules within his fenced area, then his freedom is restricted and his fences shrink. It’s simple cause and effect.

Yet it’s not a police officer’s role to punish suspects. That role belongs to the courts. If a kid is chained in a cell or handcuffed in a police car and they throw a temper tantrum, let them vent. Eventually they will tire. You can say, if you don’t stop doing that, you are going to spend the night in jail. That is totally reasonable. Parents know that following up on a consequence is essential. If you say don’t do that or this will happen, then you better be prepared to do whatever you said the consequence was or chaos will be the result. That is as long as the consequence is reasonable. You can’t say stop kicking the car or I’ll punch you in the head until I cave your face in. That is not an appropriate consequence. You can say stop kicking the car or I will shackle your feet. Ooo scary they laugh. Shackle the feet and they can’t kick any more. Problem solved. The goal is to solve the problem not to punish the suspect.

Sure it takes more time to use the fence model but it is a better way. It doesn’t provide the same venting of displaced aggression beating a child does but that is a good thing. Don’t kick the cat. If you have anger issues deal with them don’t take them out on someone else. Tasering someone after they have been hogtied is a crime in itself.