Tornado Devastation in the US 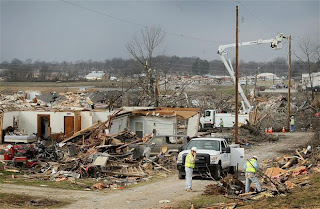 It is hard to watch the devastation left after a huge number of tornados touched down in the southern States. They say it isn’t even tornado season yet which means when the season hits more likely will be on the way. Tragic. It’s hard to prepare for something like that. Hearing news of a 16 month old toddler being found in a field after being picked up by the tornado and hurled away from her home was tragic. As was the news that she succumbed to her injuries and died along with her mother, father, and brother.

We’ve seen a fair bit of devastation globally of late. Oil spills, earthquakes, tsunamis, hurricanes, tornadoes. I’m not even going to get into the destructive weather patterns affected by global warming. Seeing those kinds of tragedies makes me ashamed. It makes me ashamed that here we are stuck in a yuppie greed war that is absolutely senseless and selfish.

We do know Vancouver will get it’s turn. It doesn’t take Nostradamus to predict that an earthquake will eventually hit Vancouver. Seismologists state it’s a matter of when not if a major earthquake will hit. We know that when an earthquake does hit, the water main will break and Surrey will be without water. All those gas heated wood framed homes will go up in flames and there will be no water for the fire department to put it out.

We know that Richmond is built on a delta in the river and when an earthquake shakes all that sand, Richmond will sink. I scoffed when I hear people go on and on about a tsunami hitting Vancouver. It will have to go through Vancouver Island first. No doubt the remnants of a tsunami could very well reach around Georgia Straight, yet the bulk of it would be taken by Vancouver Island.

So when the earthquake hits Vancouver, the downtown core will crumble, Surrey will burn, Richmond will sink and Vancouver Island will be flooded. Eat drink and be merry? Maybe not. Maybe we should appreciate the sanctity of life and appreciate what’s really important. The materialistic greed war fueled by drugs is not it.