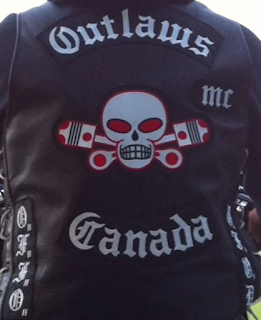 CBC is reporting that "Nova Scotia law enforcement officials are worried about possible increased friction between rival motorcycle gangs with the opening of a new Outlaws Motorcycle Club prospective chapter in the Halifax region - an area the Hells Angels consider their territory."

"The Hells Angels haven't had an official chapter in Nova Scotia since 2001, when their Halifax chapter was shut down by police. But their power base in the province has remained largely intact through their 10 support clubs." Buttkiss vs the Outlaws. My money's on the Outlaws. This is what you call a natural consequence. Sometimes in life you just have to step back and let nature take its course.