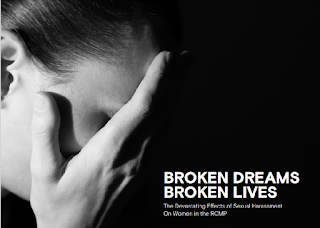 OK this one's going to be all over the map. The Indo Canadian Voice posted a link to the report on sexual harassment in the RCMP called Broken Lives, Broken Dreams. It was part of the Merlo settlement resulting from the class action lawsuit about sexual harassment in the RCMP which was rampant. Before I do that, I will cite two more recent cases of violence against women.

Jana Noella Williams was murdered in Winnipeg and Brianna Lozano was murdered in Victoria. Violence against women is an ongoing problem that still needs to be addressed.

The Merlo report states that the culture of the RCMP is Toxic and that the RCMP has had years to fix the problem. Indeed they have. It took a class action lawsuit to address it but is hasn't been fixed yet. The report cites Training at Depot as that is clearly where the problem begins. I understand that Depot is pretty toxic like the movie full Metal Jacket.

The report states that "I was told that a significant amount of sexualized conduct, drinking and abusive relationships between instructors and cadets occurred at Depot. Although I heard that over time, Depot had changed for the better, I still heard recent accounts of similar behaviour being tolerated or perpetrated by Depot instructors and cadets. I am of the view that the nature of the training that cadets receive at Depot contributes to the continuation of a toxic culture in the RCMP. In my view, it is time to revisit the approach of the training given to cadets at Depot and consider whether it is appropriate in a modern policing context."

OK so there are two separate concerns on the table. One is the negative abusive training within Depot, the other is the inappropriate sexual misconduct that goes on outside of Depot.

When I joined the Guardian Angels back in the /80's it was old school physically challenging and verbal abuse. That is how I was trained and that is how I trained. Since then I have found a better way. In the Guardian Angels the intent was not to break someone down and mold them into a clone soldier. The purpose was to screen people out who were in it for the wrong reasons and to teach them how to deal with verbal abuse on the street.

I had an experience in London, England which changed the way I perceived the old ways and I changed it. I made it 100% positive and empowering. Team building so to speak. You can train people to deal with verbal abuse on walk alongs. When you are with them on the street.

As far as the sexual misconduct that prevails outside of Depot after hours, that illustrates how dysfunctional it really is. Trainers should not be in sexual relationships with trainees. That's a no brainer. The CBC quoted Catherine Galliford who was the public relations officer during the Pickton investigation. She stated that she saw numerous problems inside the investigation, including investigators who were more interested in padding their paycheques and drinking alcohol than catching a serial killer. "They would break between noon and 2 p.m. to just drink and party and go for lunch, but then they would go back to work on Friday and claim double-time." Sound familiar? Old habits die hard yet sexual misconduct shouldn't.

Don't get me wrong. I believe in law enforcement but this is not it.