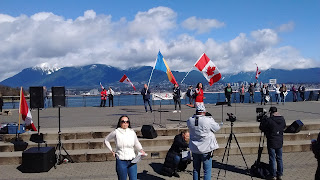 Update: I saw Chris Sky deride Drea from Rebel News. That guy is an a*shole as well as a racist. 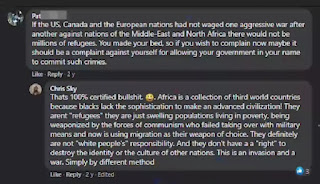 Dan Dicks caught the police videotaping the protest today. I don't think the police were filming protesters. Their video camera was pointed at Chris Sky's stage. I think they were trying to document him. If he went off denying the Holocaust again they could get him for hate speech.

Well that was disappointing. There was a break in the rain so I rode down to Vancouver and checked out the world wide Freedom Rally at Jack Poole Plaza beside the Olympic torch. Chris Sky wasn't on the speakers list so he hijacked the rally. That was a really sleazy thing to do.

If you want to plan a rally, feel free but don't hijack someone else's rally just because you weren't invited to speak. There is a reason you weren't invited. If I knew you were on the speakers list I wouldn't have gone. He's done this before back east. He got his nickers in a twist because he wasn't invited to speak so he heckled and hijacked the rally. The guy's a loser. That's why reputable organizations don't want him on their speakers list. He started off strong but got swept away in his pride and trashes reputable people in his quest for self promotion.

I saw an interview Chris Sky did with David Menzies once. David was asking Chris some legitimate questions about some controversial statements Chris had made in the past so Chris could clarify them on the record. Chris got all defensive and started trashing David then walked off in a huff calling for a boycott of Rebel News. The guy's a wing nut. He was even trashing Maxime Bernier, the most supportive politician we have. I also support Rebel News.

The Master once said "Beware of false prophets, which come to you in sheep's clothing, but inwardly they are ravening wolves." Chris Sky isn't hiding in sheep's clothing. He doesn't pretend to be anything he's not. He's a tare sowing seeds of dissension. That's what he does and he does not hide it. We've talked about the parable of the wheat and tares before.

I saw Tanya Gaw from Action 4 Canada at the rally today. She had her booth set up beside the original organizers. Evidently the other group is trashing her and her court case with Roco in defense of the Charter. Tanya is very sincere and very hard working. I know her. She has been at this for a long time now. We see all these small groups popping up trying to make money selling T shirts and they gravitated towards Chris because they think he can make them some cheddar. They're selling their soul for a bowl of soup.

Dan Dicks was livestreaming and Drea from Rebel News was there. Drea is a total rock star now. She always has a line up of people waiting to speak with her. I met Ryan's mother today and spoke with her. I know Ryan. He's from my crib. Ryan was organizing the Saturday freedom rallies at Guildford Mall last year during the pandemic.

Ryan is very sincere. I pulled back when he started endorsing the Unify the People group. They did anything but. They were all clones of each other and insisted the Canadian Charter of Rights was a fraudulent document. I said no, it's the highest law of this land and we need to protect it. The New World Order wants us to get rid of it.

Now Ryan is being led astray by Chris Sky and that is unfortunate. Chris Sky's group was even trashing Police on Guard and has pulled one of their members away to join them. Ryan's mother said see we're unifying the people. No there not. Chris Sky is sowing seeds of dissension. That's all he is and all he does. I support Police on Guard. I do not support Chris Sky.

We had a spook on here for years trying to build animosity towards law enforcement. You'll notice he's not here any more. I support law and order. The truckers united us and Chris Sky has divided us. That's disappointing. When I was speaking with Ryan's mother on the Chris Sky camp's side I could smell BC Bud. It would be better if they took all the 420 guys and went somewhere else. The Freedom Convoy is different. Chris Sky is not inclusive. He is divisive. 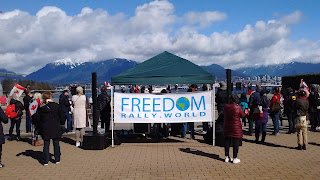 Chris Sky singles out individuals from various organizations and attacks them. He says it's not us it's you. Yet when you look at the list collectively, it's not us it's him. He is the Communist. He bullies everyone that disagrees with him. He admitted he spoke at the Vancouver rally uninvited with the intent of crashing it and bragged about how many people he pulled away from it.

Chis Sky is a racist and a Holocaust denier. The devil will tell you nine truths to get you hooked on one lie. Chris Sky is a tare who is tearing the movement apart. That makes him an agent provocateur. I do not support him. Mind how ya go.