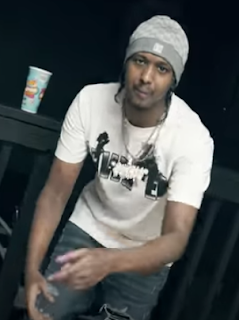 Tasco is reporting that "Around 2:45 a.m. Saturday, gunshots had been heard exterior the Ertale Lounge, which is located near 124 Street and 118 Avenue. Police discovered seven people with gunshot wounds on the scene, one in every of whom died later."

1hunnid is a rapper from Toronto. He’s Somalian. His gang’s called GGG. Aka the Go Gettem Gang. Their gang is closely linked to the Driftwood Crips in Toronto. As soon as the Edmonton Hells Angels hire any of these brothers from Toronto to shoot someone, their name is immediately released to the police and they are on the most wanted list. Don’t ya think that’s a bit suspicious?

Right after the Edmonton Hells Angels killed Geln Nelson’s wife in Vancouver, they hired BK then the Driftwood Crips to help the Wolf Pack take over for the Redd Alert in the DTES.

After the Edmonton Angels shot Ali dead, they hired Naseem Mohammed to kill Anees Mohammed. As soon as he killed Mo, Naseem’s name and picture was plastered all over the PoPo’s most wanted lists just like 1hunnid. Even in Toronto. As soon as the Hells Angels hired Naseem’s co accused crossing the border to cap someone in TO, their names and pictures were on the PoPo’s most wanted list. This is the way the Wolf Pack rolls on the people they hired.

EPS is reportng that "The Edmonton Medical Examiner completed an autopsy yesterday, Wednesday, Mar. 16, 2022, and determined that George died as a result of multiple gunshot wounds. The manner of death is homicide."

There ya have it. The bullets that riddled his body did indeed have something to do with his cause of death. Glad we needed an autopsy to confirm that death was suspicious.

Here's the deal. The EPS is compromised just like the CFSEU but ALERT is not. This is a work creation project. If there are dramatic gang shootings, the gang task force has a job and a boosted budget. If they arrest the shooters because the guys that ordered the hit are in Witness Protection and flipped on the shooters they hired, then the gang task force looks like heroes and get a raise when really they're part of the problem.

Posted by Dennis Watson at 2:45 AM