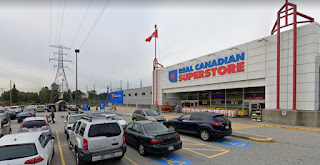 The North Shore News is reporting that "The man shot in the North Vancouver Real Canadian Superstore parking lot Friday afternoon has died. IHIT, the RCMP’s homicide investigative team has now been called in. 'When officers arrived at the scene, they found one adult male victim suffering from gunshot wounds. Despite all efforts to revive the victim, he succumbed to his injuries at the scene,' a release from the RCMP stated Friday evening."

“Jane Larsen, who works nearby, said she and her colleagues heard multiple shots around 2:45 p.m. 'There was a bunch of people standing around a man who had been shot, I believe in the belly and maybe in the hand,' she said. 'He was still alive.' Witnesses told Jeremy Liddle, who arrived shortly after, that someone in a station wagon fired six shots into a BMW."

That's just off the freeway on the way to Deep Cove and Seymour Mountain.

The shooter was in a station wagon. That's new. Hard to find one of those to steal.

Update: Police have instantly identified the victim of the shooting as 34-year-old Milad Rahimi.

"Investigators say it’s too early to say if this incident was related to the ongoing Lower Mainland gang conflict, but they say Rahimi had gang ties at the local, national and international levels. 'This is an individual who has had ties historically to the United Nations gang and many other gangs, including gangs in conflict with the United Nations gang,' said Staff Sgt. Lindsey Houghton of the Combined Special Enforcement Forces Unit."

Gavinder Grewal was shot and killed in North Vancouver December 22 2017. Rock Habib-Joumaa was shot and killed in the same North Vancouver complex Christmas day 2018. Gavinder Grewal was the founder of the Brothers Keepers. Watch Dr Spin try to bring up past history and blame the UN while she continues to cover for Damion Ryan. All roads lead to Rome.