PM @JustinTrudeau continues to get trashed in UK media over the trucker convoy crackdown one day after his visit in London to discuss the Ukraine crisis.

"He took tactics directly out of the rulebook of Vladimir Putin to deal with his own people..."
pic.twitter.com/L6AbFHdvqW

True North is reporting that "One day after Prime Minister Justin Trudeau’s visit to London to discuss Russia’s invasion of Ukraine, UK media outlets continue to skewer Trudeau over his handling of the Freedom Convoy protesters in Ottawa. One commentator on talkRADIO called Trudeau’s crackdowns on protesters akin to the tactics Russian president Vladimir Putin uses against dissenters in his own country."

True North is also reporting that "A Finnish politician is calling on the European Union (EU) to denounce Prime Minister Justin Trudeau’s violent crackdown on peaceful trucker convoy protesters in Ottawa. Member of European Parliament (MEP) Laura Huhtasaari wrote to the Vice-President of the European Commission and the High Representative of the Union for Foreign Affairs and Security Policy demanding the EU clarify where it stands on Trudeau’s actions."

True North is also reporting that "Prime Minister Justin Trudeau’s humiliation for past scandals and his handling of the Freedom Convoy continued last week at the hands of American comedian Andrew Schulz. Schulz performed at Toronto’s Meridian Hall where he dedicated a segment of his show to ridiculing Trudeau for his ongoing missteps."

They don't seem to like Justan Idiot very much in England either.

BMO and the Government of Canada freezes Druthers’ bank account and credit card. 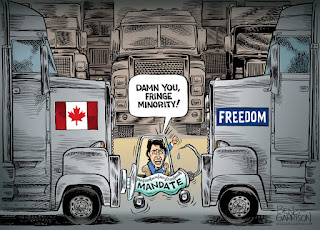