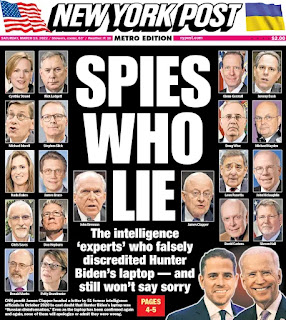 The New York Post is reporting that "A growing number of Republicans around the country are demanding a new investigation into Hunter Biden after the New York Times confirmed the authenticity of a laptop whose contents were published by The Post 17 months ago."

"Though The Post exclusively revealed in September 2020 the existence of Hunter Biden’s laptop and the potentially compromising material contained there, the story was censored by social media companies at the behest of the Democratic Party. Mainstream media outlets — including The Times — attacked or ignored The Post revelations, while the Biden administration falsely suggested it was part of a Russian disinformation campaign."

"More than 50 intelligence agency officials publicly attempted to discredit the coverage saying it had 'the classic earmarks of a Russian information operation' — and none offered any apology when contacted by The Post this week. Upstate Republican Rep. Claudia Tenney said Saturday that the episode demanded congressional action."

The CIA driven fake news covered it up because Joe Biden was the CIA's candidate. More disturbing images have surfaced. Drugs and prostitutes was one thing, incest is another. I've seen some frightening pictures of Hunter inappropriately with his niece when she was VERY young but I haven't confirmed their authenticity. It does demand an official probe.

The New York Post, quoting the book Laptop from Hell, clamed that hundreds of emails documented how the Biden family offered their services to a Chinese energy consortium and the Chinese CEO gave Hunter Biden a 3 carat gem and offered him $30 million.

"James Gilliar, a wiry, 56-year-old British ex-SAS officer, got to know Ye Jianming, the 40-year-old chairman of CEFC, when they were both working in the Czech Republic. CEFC was a Chinese conglomerate, one of the largest energy companies in the world."

"Ye’s task was to spend $1.5 billion as quickly as possible to ensure the Czech Republic would become China’s 'Gateway to the European Union,' a priority of President Xi Jinping. To that end, Ye bought everything from a football team and a brewery to an airline, before being named 'special economic adviser to Czech President Milos Zeman." Just like the Ukraine.