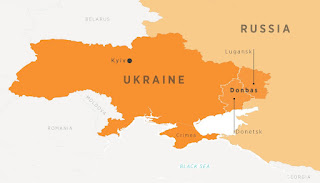 We have seen how the New World Order has gone to great lengths to censor any information coming from Russia. I saw one post that asked, if they were telling the truth, why are they so determined to censor the other side? Things that make ya go hmmm...

I saw the fake news go off about banning RT because it was a Russian based news agency. I have never considered RT to be a legitimate Russian source. I always thought it was run by the CIA. I thought that was obvious. It's not blocked. It's still there so money talks and the bullsh*t never stops. I did find a site that looks authentic. This is what they said:

"On February 21, Russia recognized the independence of the DNR and LNR. On February 22, President Vladimir Putin signed federal laws on the ratification of friendship, cooperation and mutual assistance treaties with these territories, including military assistance."

"On February 24, Putin announced the start of a special military operation in the Donbass. He called its goal 'the protection of people who have been subjected to bullying and genocide by the Kiev regime for eight years.' The President assured that Russia has no plans to occupy Ukraine, but Moscow will strive for the demilitarization and denazification of this country. As Defense Ministry spokesman Igor Konashenkov explained, NATO bases with nuclear weapons were to appear on the territory of Ukraine." Here's another Russian news source.

Putting nuclear missiles on Russia's border is an act of aggression. So is telling all the Russian citizens to leave the Ukraine because they don't want to share the country with them. Counties are using this provoked conflict as an excuse to seize assets from anyone who is of Russian heritage. That is completely wrong.

This is where the New World Order is taking us. You will own nothing because they will find an excuse to take everything you own away from you. First it's anyone who donated to the Truckers. Then it's anyone who is of Russian heritage. Next it will be you. > 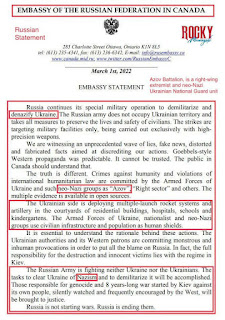 “Over the past 24 hours, a long-range high-precision weapon destroyed an ammunition depot on the territory of the military unit of Zhytomyr, where Javelin and NLAW anti-tank missile systems were stored,” Konashenkov said.

I still haven't confirmed any reports that Russian troops have actually entered Western Ukraine. They appear to be targeting military sites and bio labs with missiles. I saw a burning building on global and they said look at this University on fire but it didn't look anything like a university.

"Due to the unwillingness of the Ukrainian side to influence the nationalists or extend the 'silence regime', offensive operations have been resumed from 18:00 Moscow time,” he said. The units of the Russian armed forces are advancing on a broad front and have taken control of the settlements of Malaya Tokmachka, Marfopol, Removka, Novokarlovka, Orlinskoye, Volodino and Malinovka, the department added. (I think silence regime means cease fire.)

The fake news states Russia's claim that the white nationalists in the Ukraine have been bombing the Donbas since 2014 is a lie. I don't think it is. They claimed their independence. It is well within the realm of believability that they started bombing them after that. Perhaps even before. Perhaps that's why they claimed independence. We know they didn't want to be part of the coup against the president who was of Russians heritage elected in 2010.

"At 7:30 a.m., Ukrainian troops fired seven banned 120-caliber mines at the village of Vesele in the Donetsk People's Republic (DPR). The representative office of the DPR in the Joint Center for Control and Coordination of the Ceasefire (JCCC) reported this on its Telegram channel."

Russian troops occupied a Ukrainian military base in the Kherson region

The Politicians Calling For ‘Freedom’ Now Are The SAME ONES Who Took Yours Away Months Ago "While the media and your leaders are demanding that you take a side, it is important to remember that it is entirely possible to stand against the Russian invasion in Ukraine as well as the folks who helped to instigate it."

"There is no question that NATO policy over the last 8 years has pushed Vladimir Putin into a corner, creating a direct threat to the national security of Russia. And, as Chris Hedges points out, 'Russia has every right to feel threatened, betrayed, and angry but to understand is not to condone. The invasion of Ukraine, under post-Nuremberg laws, is a criminal war of aggression.'"

"For starters, Ukraine is not a democracy as democracies don’t take down three TV stations for being critical of the president. Democracies don’t kidnap and cage their political opposition, who happened to come in second in the election process. And, democracies don’t bomb innocent civilians within their own countries for not being loyal to the party. Undoubtedly, the people of Ukraine desire freedom and democracy — but their leaders have made it clear that this is not their end game." We Not Only Fight For Ukraine – We Fight For This New World Order