Slandering and demonising of the Canadian truckers by Anita Krishna 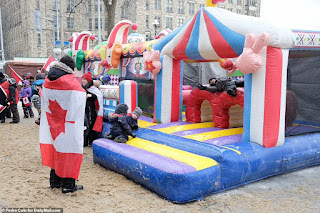 Anita Krishna on News Uncut said "ON SUNDAY, January 30, if you watched the 6 o’clock news in British Columbia, Canada on the most watched station in the province, a show that I directed for eight years by the way, until my recent firing from Global News, there was not a single story about the massive Freedom Convoy, not one."

"If you dropped on to the planet that very day and that newscast was the only thing available for you to watch, you would never know that a world-record breaking convoy of semi-trucks that stretched 70 kilometres, (43 miles) and up to 18,000 people descended on to Canada’s capital city Ottawa, to protest vaccine mandates. Not a peep. Not a peep about the hope and inspiration these truckers have given to Canadians and people all over the world.'

"Why do the mainstream media here in Canada act in such a horrendously biased way? It has been reported by Ezra Levant of Rebel News that Trudeau gave newspaper bailout money to Canadian newspapers to the tune of $60million. As for broadcast television, $61m was handed out in secret payments."

"One thousand 500 hundred of those news outlets took the cash and, as a result, that is about 90 per cent, so in Canada the overwhelming majority of all mainstream media are on the proverbial Trudeau dole. Radio stations are also questionable because here in BC, CKNW Newstalk is owned by Corus Entertainment (Corus Premium Television Ltd.) Corus owns Global TV also."

"And so here we are, unless you are independent, all mainstream media are vaccine salesman and nothing more than a mouthpiece for the government. That’s right, you’re a Trudeau journalist." So, if they lied about the convoy, what else are they lying about?