Strangling Canadian oil and gas is a bad idea 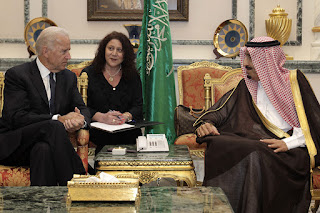 I'm going to expand upon this post but I just wanted to throw something out there to get the ball rolling. We have all seen how oil monopolies and fake environmentalism have led to organized crime. Donald Trump got the US off Saudi oil while Joe Biden got the US back on Saudi oil just like George Bush. This psychotic obsession with Trump is really Dr Phil. I don't care about Donald Trump. I care about self reliance and domestic oil and gas.

Justin Trudeau and Joe Biden have been determined to strangle domestic oil and gas production in the name of fake environmentalism. In reality, it just got us back on Saudi oil and assisted their oil monopoly so they can raise prices as high as they want wich raises the cost of everything.

Gregory Tobin wrote a piece for True North wherein he sates that "So while Trudeau and Guilbeault have been stifling pipelines, the oilsands, carbon tech, and so on at home, Putin has become one of the main energy suppliers of Europe and the world. In fact, Russia exported $55.5 billion worth of natural gas in 2021." Let's pause right there.

There is nothing wrong with building natural gas pipelines. It reduces diesel emissions from transporting it by truck. Natural gas pipelines are great for the environment. Michael Moore's last documentary Planet of the Humans exposes the media's endorsement of fake environmentalism. Burning industrial coal to generate electricity for electric cars is not green. It is a global fraud. Surrey has garbage trucks that run on natural gas. That is green.

Saudi Arabia has started to promote natural gas in the shipping industry. That's great and brings us back to the oil and gas monopoly. While Joe Biden strangles domestic oil and gas production, his buddies in Saudi Arabia benefit from it. That's organized crime.

As Gregory Tobin points out, while Canada and the US have cut back domestic oil and gas production, Russia has risen to fill the gap. That upsets Saudi Arabia because they want to cut production so they can raise prices.

That's why Saudi Arabia launched an oil war with Putin in Syria to terminate the rival pipeline from Iran. Building both pipelines would be in everyone's best interest. Saudi doesn't want that because they want a monopoly and fund ISIS to attain it.

Maybe Putin just has a different vision. Perhaps Putin is the Costco of oil and gas. If you keep your prices low, you make more money on volume. That makes sense. Saudi's greed is driven by their obsession with a monopoly. If they obtain a monopoly, they can charge what they want and don't have to increase volume. Greed is evil and that is what we are endorsing in the Ukraine.

Provoke a war with Russia then you can boycott their oil and Saudi makes more money. When you connect the dots and do the math, the truth becomes clear. Biden cuts back domestic oil production then provokes a war with Russia to cause a boycott. Gas in Vancouver today is 2.10 a litre. That is organized crime. Especially when we are fully capable of producing it here at home.