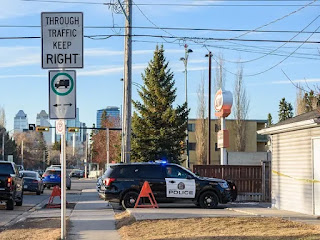 The Calgary Herald is reporting that "Homicide detectives are investigating after a man was found dead in a truck on 16th Avenue N.W. early Monday morning, shortly after reports were received of shots fired in the area. Police say witnesses reported the victim was stopped at a red light at the intersection of 16th Avenue and 4th Street N.W. when a second driver pulled up, exited his car and fired several shots before fleeing east. Investigators believe the shooting to have been targeted." Ya think?
Posted by Dennis Watson at 6:52 PM