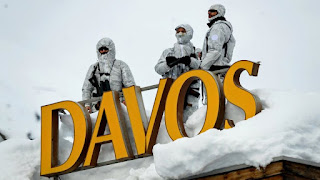 I was astounded to hear that Switzerland announced it froze Russia's bank accounts there. Switzerland is known for two things. Well, three now. The first two were neutrality and banking. They were neutral during the First and Second Wold War and provided a safe haven for Hitler's stolen treasures. So here's me doing the math. Hitler's holocaust was OK but Putin's resistance to NATO expansion isn't. That doesn't make sense. At all. Then it hits me, Davos.

Davos is in Switzerland. That is where the World Economic Forum holds it's annual event. Switzerland has fallen to the WEF like everyone else. Centralized banking is a crucial part of Communism. We can now see why. If the government can freeze your bank account, they have complete control over you. This is not good. The WEF is using NATO to impliment their NWO.

In a NATO meeting hosted by the WEF, the president of Turkey said NATO supports a liberal democracy and is considering partnering with China but not Russia because Russia supports an illiberal democracy. A liberal democracy is a representative democracy with protection for individual liberty and property by rule of law. That is not what China has or supports.

An illiberal democracy is a governing system in which, although elections take place, citizens are cut off from knowledge about the activities of those who exercise real power because of the lack of civil liberties; thus it is not an open society. That is what Justin Trudeau has turned Canada into. Their definition of liberal democracy is Globalism run by leftist liberal extremists. BTW Turkey invaded Syria to oppose the Russian pipeline from Iran in support of the Saudi pipeline from Qatar. Supporting individual liberty had nothing to do with it.

Article 4, Section 4 of the US Constitution states that "The United States shall guarantee to every State in this Union a Republican Form of Government." That does not mean a support for George Bush and Mitt Romney's Globalism. A Republican Form of Government means a free republic where civil liberty is protected by law. Globalist Republicans are redefining that just like Liberals extremists are redefining Liberal Democracy. This is why we need to study the Federalist papers so we can understand the original intent of the Constitution not the diluted jurisprudence from judicial activism striving to replace the Constitution with Globalism aka Communism.